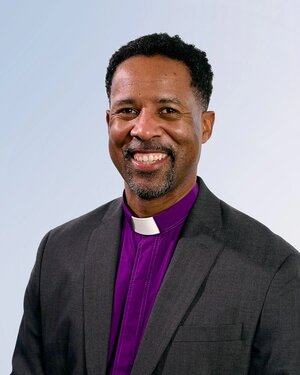 Bishop Cedrick D. Bridgeforth, Ed.D., is assigned as the resident bishop of the Greater Northwest Episcopal Area of The United Methodist Church (encompassing the Alaska, Oregon-Idaho, and Pacific Northwest Conferences), effective January 1, 2023. Bridgeforth was elected to the episcopacy by the Western Jurisdiction in November of 2022.

An ordained minister, author, educator, organizational development consultant, public speaker, and entrepreneurial coach for nonprofits, before his election, Bridgeforth most recently served as the director of innovation and communications for the California-Pacific Conference of The United Methodist Church (UMC). For over 30 years, Bridgeforth has been a trusted leader, offering his gifts and expertise in various pastoral, administrative, and leadership capacities.

As a spiritual leader, he has served as lead pastor in four congregations in Los Angeles and Orange Counties in California. Those pastorates ranged from predominantly African American congregations in the heart of the Crenshaw District to multi-ethnic, multi-cultural, multi-lingual, and multi-site ministries in the inner-city and suburban sectors of Santa Ana. These pastorates included Grace UMC Los Angeles (2018-2021), Santa Ana UMC (2015-2017), Crenshaw UMC (2003-2008), and Bowen Memorial UMC (1999-2003).

For eight years (2008-2015), he served as a district superintendent and dean of the cabinet in the California-Pacific Conference (Los Angeles and West Districts), one of the most diverse regions in United Methodism with language and cultural ministries from over twenty regions of the world. The geography spanned coastal, mountain, rural, and desert communities.

Within the Methodist Church, he has been a candidacy mentor for those discerning a call to ministry and a supervising elder for those in the provisional and full connection review processes. He was elected a clergy delegate to general and jurisdictional conferences in 2008, 2012, 2016, 2019, and 2020. In 2016, 2019, and 2020, he was the first elected clergy delegate for the California-Pacific Conference. Those elections led him to serve on the General Board of Pensions and Health Benefits (now Wespath) and as a member of the Western Jurisdiction’s committee on nominations.

From 2013 to 2016, Bridgeforth served as president of Black Methodists for Church Renewal (BMCR) and co-convener of the Inter-Ethnic Strategy Development Group.

Along with service in the UMC, Bridgeforth began work as a course instructor at the University of La Verne’s Ecumenical Center for Black Church Studies in 2003. In 2016, he was named director of academic programs and outreach. During this time, he taught courses, led workshops, updated policies, recruited faculty, consulted on core curriculum, and created the framework for a community-based lay and clergy continuing education program.

A native of Decatur, Alabama, Bridgeforth is a U.S. Air Force veteran who earned a bachelor’s degree in religion from Samford University, a Master of Divinity degree from the Claremont School of Theology (CST), and an educational doctorate in organizational leadership from Pepperdine University. He is the author of Alabama Grandson: A Black, Gay Minister’s Passage Out of Hiding, Thoughts and Prayers, and 20/20 Leadership Lessons: Seeing Visions and Focusing on Reality. Along with appointments to local church contexts, he also worked at his alma mater CST, as an admissions counselor and as director of alumni and church relations.

Bridgeforth is a life member of Alpha Phi Alpha Fraternity, Inc., a Harry Hoosier member of BMCR, International Coaching Federation, Methodist Museum for Social Justice, spiritual advisor for Strength for the Journey HIV Camp, and participant with L.A. Veterans Collaborative and U.S. Vets. In June, he completed the AIDS/LifeCycle, a 545-mile bike ride from San Francisco to Los Angeles.

As a nonprofit leader and consultant, he is passionate about a wide range of social justice issues, including restorative justice, homelessness, and hunger. He has successfully restructured complex organizations to meet the current and future challenges of fulfilling their ongoing mission, building upon organizational values through purposeful listening to constituent groups and data gathering. He has led these organizations to create consensus around a renewed vision, innovative program areas, and building the financial strength, organizational processes, and teams to support them.

Bridgeforth is married to Christopher Hucks-Ortiz. Hucks-Ortiz is a public health and research professional with demonstrated leadership in the U.S. domestic and global field of infectious disease focused on HIV/AIDS, substance abuse, STIs, and Hepatitis prevention and intervention. He has successfully secured public funds to support research and health programs targeting key vulnerable populations. They reside in the greater Seattle area.