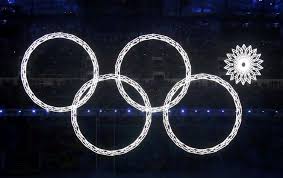 What’s the buzz from the Olympic Opening Ceremonies?  If you heard anything about them – it was that one of the circles in the massive Olympic rings didn’t open and thus sat there looking either like a sunflower or one of those Spirograph drawings you made with ballpoint pens when you were a kid.   Failure?  You bet – and on an epic stage.  And there have been other high profile “failures” at these games too – think Bode Miller and Shaun White…no gold, no medals at all.

But really – if these “failures” are all that we focus on  – then we miss the real story.  Where there is risk, there is a chance of failure…but there is also the opportunity for great reward.  Sure, the Olympic ring didn’t open.  But did you see the rest of the ceremonies?  They were amazing…a little girl walking on air, incredible horses flying, and entire re-creations of towns and cities.  Bode and Shaun didn’t win – but did you see their drive and desire to be the best?  Their previous accomplishments speak for themselves and the risks they were willing to take to be number one are awe-inspiring.

Was there a fear of failure at every turn?  No doubt about it.  But, as a leader in your congregation, if you live into that fear, it will stop you from helping your flock become the generous people God is calling them to be. If you are afraid that people will be offended if you preach about money, or treasure, or stewardship, then you need to pray for strength and courage to overcome it.  Once you’ve done that – then force yourself to do the risky thing and do what you fear – and to do that:

Don’t let the fear of failing stop you from doing the important work God has called you and your congregation to do.  I like how Eugene Peterson restates Matthew 10:26-28:

Don’t be intimidated.  Eventually everything is going to be out in the open, and everyone will know how things really are.  So don’t hesitate to go public now.

Don’t be bluffed into silence by the threats of bullies.  There’s nothing they can do to your soul, your core being.  Save your fear for God, who holds your entire life – body and soul – in his hands.

Cesie Delve Scheuermann is a consultant in stewardship, development, and grant writing.   Over the past decade, while working as a volunteer and part-time consultant, she helped raise nearly $2 million dollars for numerous non-profit organizations.  She served as the Oregon-Idaho Annual Conference Lay Leader from 2008-2012.  Her position with the Conference is funded through a generous grant from the Collins Foundation.  You can reach her at inspiringgenerosity@gmail.com.