Spirit Alive: What if Mr. Rogers Were President?

Spirit Alive: What if Mr. Rogers Were President? 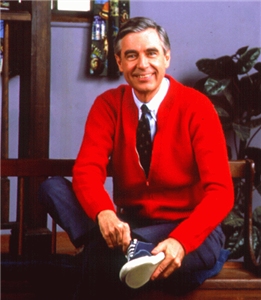 Food for the Soul:

What Kind of People Could We Be?

"A new command I give you: Love one another. As I have loved you, so you must love one another."
Jesus' words as recorded in the Gospel of John 13: 34
A few weeks ago, Susan and I went to see the movie Won't You Be My Neighbor? It is about Fred "Mister" Rogers, who for decades educated children through his marvelous series, Mr. Rogers' Neighborhood, on public television. The movie is a remarkable testimony to his mission and ministry in life, which while being focused on children could easily have been a primer for adults on how to live life. Mr. Rogers was not only a creative genius, musician, puppeteer, and television personality and producer, but he was also an ordained Presbyterian minister, who was deeply interested in child development and decided that "television has a chance to make a neighborhood out of an entire country," if used appropriately. And he tried to do just that through 1,765 episodes of his show for children on television.
Rogers felt that part of our role as adults was to assist children in being able to confront what he called "the modulations of life." He believed that someone had to help them through the realities of living and do so with a deep sense of responsibility and understanding. He also believed that it was important to "make the most of this beautiful day" and that "love is the root of everything" from family life to how we treat strangers.
It sounds pretty radical, but as Christians this outlook on life should sound pretty familiar as well. After all our own United Methodist Church's mission statement says that we are called to make disciples of Jesus Christ for the transformation of the world, which is pretty much what Mr. Rogers was talking about through all those years of television.
As I watched Won't You Be My Neighbor? I couldn't help but think about my own Dad. While Mr. Rogers was born a bit later, he reminded me a lot of my Dad...and others from the World War II generation, who grew into adulthood seeing hatred and confronted it with love, saw fascism and choose to defend democracy, who believed in upholding peace in the neighborhood, but found themselves having to go to war to fight for it.
Yes, the world that they were defending was not at all fully inclusive nor racially just, but as Mr. Rogers himself knew, there were basic principles of goodness and decency that had to be a part of any attempt to restore the world. In fact, Mr. Rogers understood this in profound ways and as a result, addressed difficult subjects such as the assassination of Bobby Kennedy, race relations, and he even ventured into the inner city in order to understand the dynamics of children growing up in those settings as well. Watching Won't You Be My Neighbor got me to thinking about what kind of nation we might be if Mr. Rogers was our President and we re-examined how we talk about and treat each other. Here are a few tidbits I took away from watching this profoundly moving film:
1. Love is at the root of everything ad everybody needs to know that they are loved and that they are capable of loving. Mr. Rogers had a special fondness for the number "143," which were the number of letters in the three words "I love you"...and also happened to be Mr. Rogers weight for most of his life.
2. You can be liked just as you are and that the greatest evil in the world is committed by those who make you less than you are, because human dignity is so important.
3. As King Friday the 13th demonstrated on his show, people build walls when they fear change and this separates people from each other and ultimately destroys community.
4. The most important thing is to listen... and silence is one of the greatest gifts in life.
5. What is essential to life is invisible.
6. What we hear and see is what we become.
7. We all need a neighborhood in order to be whole as individuals and as a people.
I know some of you may be saying to yourselves, "Yeah right. It is simply too idealistic to ever think that Mr. Rogers' ideas could become public policy. That would be crazy and naive." But if that is the case, then why would we ever pretend to follow Jesus' command to love God and love others as ourselves? That seems pretty basic as well, and yet this ideal is the foundation upon which Jesus' political philosophy is built: simply to love. Perhaps it can all be summed up by these powerful words written by Bessie Anderson Stanley. They are quoted by Joanne Rogers, Mr. Rogers' wife, in the Forward to his book, The World According to Mister Rogers:
"He has achieved success who has lived well, laughed often, and loved much, who has enjoyed the trust of pure women, the respect of intelligent men, and the love of little children, who has filled his niche and accomplished his task, who has left the world better than he found it, whether by an improved poppy, a perfect poem, or a rescued soul, who has never lacked appreciation of Earth's beauty or failed to express it, who has always looked for the best in others and given them the best he had, whose life was an inspiration, whose memory a benediction."
Sounds a bit like Mr. Rogers to me. Amen? Amen.... Let us walk in the light of God's love,
Lowell
Spirit Alive is a twice a month blog and email by Rev. Lowell Greathouse, Mission and Ministry Coordinator for the Oregon-Idaho Conference. It seeks to identify where the spirit is alive in our congregations and communities. Check out past editions, or subscribe to the email list.