Spirit Alive: Where Would the Bible Be, Without the Stories of the Refugee?

Spirit Alive: Where Would the Bible Be, Without the Stories of the Refugee? 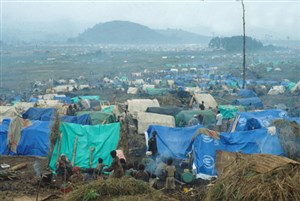 Food for the Soul:

What Does It Mean to Be a Stranger in a Strange Land?

"They dress the wound of my people as though it were not serious. 'Peace, peace,' they say, when there is no peace."

Recently, I heard a refugee say on a National Public Radio program: "The minimum requirement for a dream is to have a safe place to lay one's head."

In June 1982, Susan and I met for the first time. Each of us had been asked to serve on an international delegation heading to two refugee camps...El Tesoro and Mesa Grande. Both camps were located in Honduras, along the Guatemalan and Salvadoran borders. Our trip took place in the midst of the fighting and conflict that was occurring throughout Central America at the time.

We had each been invited by the East Bay Sanctuary Churches to travel to these two camps in order to serve as an international presence there. Prior to this experience, Susan and I did not know each other, but we both shared a heart for this region of the world and for the plight of the people who lived there. So we agreed to go, not knowing fully what would be involved.

Susan and I were sent there, because an American nurse and a Guatemalan doctor, who had been serving in this region with the refugees, had been abducted by the Honduran military, and there was an urgent need for internationals to go and provide a presence there.

As it turned out, the American nurse, Cynthia Morin, had just been released and was testifying before Senator Kennedy's Committee on Refugees shortly before we departed. ...and the body of the Guatemalan doctor, Dr. Oscar Giron, was found in the town near the refugee camp we were visiting the week we arrived. At the time, these stories made the national news, appearing in the Washington Post and the New York Times.

As this story was unfolding, the Bay Area Sanctuary Churches were beginning to consider a new strategy for assisting refugees who were fleeing their countries for safety. Previously, these congregations had supported families that had fled to the US to escape the violence, but they had not sent church volunteers to Central America to be present there.

Sending Susan and I to these camps in Honduras was their first step in what turned out to be an on-going commitment by these churches to provide an international presence in the refugee camps themselves. It was a dramatic, faith-filled decision in keeping with the longstanding Biblical commitment to remember refugees and find ways to treat them well.

Prior to going to Honduras, Susan and I had heard the stories of pain and suffering that touched the lives of so many families, as they experienced violent oppression in their countries. But there is nothing like living in a refugee camp for a couple weeks to understand what fear, vulnerability, and powerlessness look like for these individuals. To lose one's home and country and sometimes to even witness the killing of family members, while being displaced by war and violence...and being forced to seek refuge in a foreign place are not easy things for anyone to manage.

But being an international observer in a refuge camp is one thing, actually being a refugee is something completely different. Back in 1982, Susan and I got to go back home once another international team of observers came to replace us.

Jorge, Maria, Raquel, Armando and thousands of others in those Honduran refugee camps had to live there without any clear sense of their future...and with no possibility of returning home safely. That kind of suffering is truly impossible to fully comprehend.

Yet today it is the plight of over 25.4 million people worldwide who are refugees in other countries (the highest number ever recorded)...not to mention the over 68 million people who have been forcefully displaced from their homes. According to the United Nations High Commission on Refugees, 1 in every 110 people globally is either an asylum-seeker, internally displaced, or a refugee.  It is an unprecedented crisis in the world.

But rather than focus on numbers, I'd instead like to invite you to read a couple very powerful and human reads about the life of refugees today. One is from the point of view of a father...the other is about a group of refugee soccer players, living in a small town in Georgia.

A second book that will give you insight into the challenges of the refugee crisis is Outcasts United: An American Town, a Refugee Team, and One Woman's Quest to Make a Difference.

Both books will give you deeper insight into the human dimensions of the worldwide refugee crisis.

This summer, Natalia Olivares, a student at Portland State University, joined our Annual Conference Mission and Ministry staff as an Hispanic Ministries and Immigration Intern, thanks to funding provided by the National Plan for Hispanic/Latino Ministry. Natalia is here to help resource us as an annual conference, so that we can be more faithful in our work with immigrants and refugees as an annual conference. While Natalia only works on a part-time basis, feel free to contact her at Natalia@umoi.org if you would like to be a part of our growing immigration network.

And...if you would like to learn more about the immigrant crisis in our midst and what faith communities are doing to respond to the situation, go to the Inter-faith Movement of Immigrant Justice website for more background, information, and ideas about things you can do to respond to the refugee crisis as people of faith.

Let us walk in the light of God's love,

Spirit Alive is a twice a month blog and email by Rev. Lowell Greathouse, Mission and Ministry Coordinator for the Oregon-Idaho Conference. It seeks to identify where the spirit is alive in our congregations and communities. Check out past editions, or subscribe to the email list.