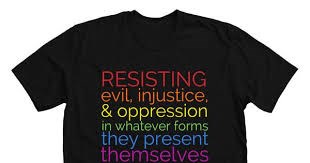 At last month’s Annual Conference gathering of the Oregon-Idaho United Methodist Church Conference in Eugene, Oregon, there were people wearing t-shirts—including the Bishop—that quoted part of the baptismal covenant used within the UMC. The words that stand out on this shirt, in various rainbow colors, are “Resisting evil, injustice, and oppression in whatever forms they present themselves.” The people wearing the shirts are saying that they are resisting evil, such as the 2019 General Conference’s re-affirmation of the Book of Discipline statement that “homosexuality is incompatible with Christian teaching” with the rainbow design of the lettering suggesting that the wearer is pro-LGBTQI+.

In other parts of the United Methodist Church in the last few months I’ve been reading more about resistance than I have since I left teaching at Duke Divinity School. Resistance of the “Traditionalist Plan,” approved by the 2019 General Conference, has spread throughout the United Methodist Church, especially in the US. In the last few weeks, many UMC Conferences in the US, along with other parts of the world like Norway, have discussed ways to resist the actions of the 2019 General Conference. And the Rev. Ginger Gaines-Cirelli of Foundry UMC in Washington, DC has written about a “sacred resistance,” which is driven by God who leads the body of Christ in the work of mending a broken world, though many have taken up the banner of “sacred resistance” in standing up against the actions of the last General Conference.

To resist is to exert oneself, with force, in opposition to another body, or in this case, against the decisions of the majority of a church, in which many believe that evil—namely, opposing the place and presence of LGBTQ+ in church leadership, let alone a church—is being perpetrated.

Resistance is not new to the people of God, let alone to LGBTQ+ people. In his blog, Progressive Christian Reflections, LGBTQ+ activist, writer, and pastor Chris Glaser wrote that resistance is as old as the Bible itself, citing the story of Rizpah’s resistance, protecting the bodies of her dead sons (2 Sam. 3:7, 21:1-14). He then reminds the reader that resistance is part and parcel of the modern LGBTQ+ community. He reminds us that in 1955, Phyllis Lyon and Del Martin founded the Daughters of Bilitis, a lesbian activist group. In 1964, there was the beginning of the Council on Religion and the Homosexual in San Francisco. Nine months before the Stonewall Inn riots, the Rev. Troy Perry and twelve people founded Metropolitan Community Church in 1968. There were people like Bayard Rustin, Martin Luther King, Jr.’s right hand person, Christian Jorgensen, Barbara Gittings, Frank Kameny, and many others, who created a multiple social, political, and religious gather that knew well the art of resistance. Of course, there was the 1969 resistance of drag queens and people of color, and LGBTQ+ people who resisted the New York City police officers at Stonewall Inn.

So, as many within the UMC resist and prepare for more actions of resistance against the re-affirmed statements within the Book of Discipline which are antithetical to Jesus' teachings as illustrated in the Gospels, and perpetrate evil, know that you are in good company. Heck: you may have some things to learn from the LGBTQ+ community. God works in mysterious ways. And after all, we do know something about resistance.