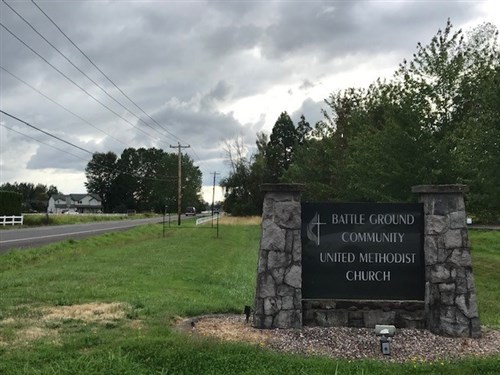 This past Wednesday, July 10, 2019, I met up with some United Methodists from the Vancouver-Camas, Washington area, to talk about issues confronting LGBTQI+ folks and straight allies in local Methodist congregations in light of the decision made during the specially called General Conference of The United Methodist Church in St. Louis, MO. It was a great conversation with two pastors from the area and lay leaders, some straight and others LGBTQ+. What struck out to me was that the church where we were meeting—Battle Ground Community UMC—was missing their rainbow banner that hung next to their church sign. Someone had stolen their rainbow banner. As their pastor, Rev Susan Boegli ,wrote in her weekly note to the congregation, “I’ve share before that this message (the banner) of full inclusion has been the absolute best ‘evangelism tool’ I’ve ever seen. So many of you came through our doors because of our message to the community.”

While in some urban, metropolitan communities, some churches put out a rainbow flag or banner and think that’s all they need to do in the name of “inclusion,” failing to do the hard work of welcoming, affirming, and integrating LGBTQ+ people in the active life of a community of faith, in other contexts—rural and even some suburban contexts—putting out a rainbow flag or banner is a heck of a statement. As Pastor Susan said, it sent a message to the surrounding community of Battle Ground, WA (only 10 miles north of liberal Portland, OR and Multnomah County) that this was a church in which folks from the LGBTQ+ community were and are welcome.

Here’s a lesson I learn time and again. As one trained in the art and practice of anthropology, I love reading road signs as a narrative of a community, especially during political campaign season. The lesson I keep learning and re-learning from reading small signs in front yards and backyards of the homes and fields I pass by while driving in the country never stop amazing me, even as I grow older and hopefully more worldly-wise. The lesson? I may think my preferred candidate is the best and most obvious choice among smart, well-educated, people of faith, but then my eyes are opened when I am on these meandering road trips into the more rural areas in and around our “liberal bubbles”, be it Chapel Hill, NC or Portland, OR. I am always amazed at who is the preferred candidate to other people in more rural parts of the very same state where I live.  Small political signs and other road signs tell us much not only about the politics of an area, but the cultural preferences of an area, including how open and affirming an area would be to LGBTQ+ folks. After all, signs matter!

Here’s the thing: when I attended United Church of Chapel Hill, a UCC congregation, in the middle of liberal Chapel Hill, NC, home of the University of North Carolina, their rainbow banners and signs were stolen so often they were kind of use to it. And on the Facebook posting about the stolen rainbow banner in Battle Ground, someone posted that Central Lutheran Church in progressive NE Portland, OR had their sign stolen a few years ago. What some churches do is create a line-item in their annual budget for buying rainbow banners because the theft happens so often, whether in the rural countryside area around liberal bubbles, or in the heart of the liberal bubbles themselves. There are some people who simply think that stealing the rainbow sign will stop the Holy Spirit from opening hearts, minds, and bodies of people of faith, let alone the progressive spirit alive around the world, in which love will win. Those people who steal the signs are wrong.

As Pastor Susan ends her note to her congregation: “We believe that, in light of the damage done to our sign and then the theft of our sign, the message we want the community to know is a powerful one. When we speak, with words or images, the prophetic truth of God’s love, some people will hate us.  That’s what the Gospel does. That’s when we know for sure that the Gospel of Jesus Christ is (effectively being) shared,” and making a difference in the communities in which we live.

So, churches: Prepare for more theft of rainbow flags and banners in the short term, knowing that in the long term, love will win.