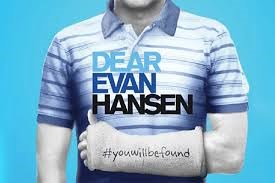 Last night, I attended a performance of Dear Evan Hansen, performed by the national touring company of the Broadway show at Portland’s Keller Auditorium. Dear Evan Hansen has won many awards, including the Tonys and a Grammy. The musical focuses on the teenage years in modern America, with loneliness, mental illness, drug use, suicide, and family dysfunction dancing all around the stage and through all the songs. AH, the high school years at Beaverton High!

Teenage Evan Hansen is a loner in a large high school, and in his senior year he is struggling with depression and anxiety, seeing a therapist, who recommends that, once a day, he writes a letter to himself that always begins with these words, “Dear Evan Hansen, Today is going to be a good day. And here’s why…”

One day, in the school’s computer lab, the letter of the day that Evan had just printed out, in which it wasn’t a good day, and he explains why in the letter, is taken out of the printer by Connor Murphy, another lonely teenage boy. When Connor kills himself that night, his parents find this letter in Connor’s pocket the next day, and think it is Connor’s suicide note. Not knowing how to tell the truth, Evan, along with his friend Jared, create a series of emails, and post-date the emails, which becomes fodder for the growing lie about the fictional close friendship between these two young men. At one point, there is the tug to make this fictional close friendship a gay relationship, but Evan’s character pulls it back to heteronormativity quickly, because of his infatuation with Zoey, Connor’s sister.

The performance was excellent! I enjoyed the show more than I thought I would. The performers were fantastic. The music never got boring to me. The set and lighting design were exciting.

The only problem I had with the show’s plot was exploring a little bit more of a possible gay relationship between Evan and Connor, which was taken so abruptly out of the narrative, that it was never brought up again, even as a possibility, throughout the rest of the show.

I was Evan Hansen and Connor Murphy in junior high, high school, and college.

I could’ve written Dear Brett Mitchell letters to get me out of my zone of fear, self-hate, and loneliness as a closeted young gay adolescent.

I hid, as I usually do, in a very busy, active social life, performing in all the theater productions, singing and playing piano in the choral performances, running for various school government offices, attending youth group at Valley Community Presbyterian Church and Young Life, piano recitals, track, and possibly even doing homework. As an extrovert, I hid my loneliness, anxiety, and sadness in being gay—or at that time, a “homosexual”—by purposefully throwing myself into a dizzying social calendar. I dated young teenage girls publicly, while kissing young men my age secretly, behind closed doors.

As I’ve written before, there were no fabulous young gay men’s narratives that I could read, watch on TV, see in the movies, or sing with gay performers recorded on cassette tapes or albums (yes, I’m that old). And the Church, universal, was not a place of sanctuary, a “safe zone” of sorts. Instead, what was pushed and promoted in church youth groups and Young Life, and later Campus Crusade, InterVarsity, Navigators, and the rest, was heteronormative practices.

Again, like Evan and Connor, I was alone with my feelings, impulses, thoughts, physical attractions, and didn’t know where to go with any of them, except try to fit into the world as it was presented before me.

Herein lies my concern: have things changed that much in middle school or high school youth groups in our churches, that it is OK to be LGBTQ+? I know that there are more and more schools with Gay-Straight Alliance (GSA) groups, and other social outlets with LGBTQ+ centers in urban and suburban areas. But are we still forming and nurturing young LGBTQ+ people to be social recluses, alone, anxious, and depressed in our communities?

I fear the answer is yes.

This is why we, in the Western Jurisdiction of the UMC, are hosting, Q Camp: High School, August 7-9, 2020, at Camp Magruder on the Oregon coast near Tillamook. It is an all LGBTQ+ staffed camp for only LGBTQ+ high school students.

This is but one respite from the loneliness and sense of isolation, and hopefully, in the years to come, we will be able to provide more resources for LGBTQ+ not only in the UMC but other communities of faith as well.

For now, my hope is that when someone else who is LGBTQ+  writes their “Dear” letter, they will follow with, “It turns out this was an amazing day after all, and it is going to be an amazing week and an amazing year, because I am a beloved child of God, loved by my parents or guardians, and by a community of faith who love and support me, just as I am.”

And I will go see that Broadway show as well.