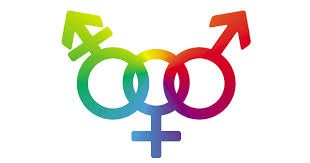 Actually, Non-Binary Gender People Day was yesterday, July 14, 2020, which is the day I began working on this blog posting. Like so many other birthdays and anniversaries in life, I am belated in this celebration.

In a world of binary (false) choices—male and female, Republicans and Democrats, pink or blue, us and them—breaking through the façade that there are only two choices, there are those who are created also in the image of God who choose to be neither male nor female, but both or none.

For the most part, people—including many of those who identify as cisgender or transgender—are either male or female. Modern society, like ours, tends to recognize just two genders, which can also be called “gender binary.”  Binary means having two parts, which, in this case is male and female. Note: this is different than gender identity, in which we use the nouns “man” and “woman,” a way of letting the world know how we identify ourselves.

After all, all these designations of male and female, man and woman, are socially constructed labels, made up and invented by people, and can be changed by people as well. They have changed throughout time, and changed in different cultures, and will continue to evolve.

Some people simply don’t neatly fit into the two categories of man or woman, male or female. Some people don’t identify with either gender, while some people’s gender changes or time, and there is a fluidity between the genders.

It is really not anything new. Many people who are non-binary gender simply chose not to identify themselves to their family, their churches, or their jobs and other social groupings, because they didn’t feel it was safe, just like other LGBTQ+ people.

My realization of non-binary gender people in my city and state came to light when Oregon Department of Motor Vehicles, as of July 1, 2017, made it possible to change one’s gender designation, given to a person at birth, on one’s driver license and ID by simply requesting a new or replacement ID. One could simply choose one of three gender markers one wised to have listed: M (male), F (female), or X (not specified). Like the recycling bottle bill, we were the first in the nation with this designation!

Some people who are non-binary use “they/them/their” while others use “he” or “she,” and still others use other pronouns, like xe, xem, xyr, xyrs, or xemself.

How fun! How liberating! How fabulous is that?!

So, let’s celebrate all the people in our world, and in our lives, and in our churches, who are non-binary gender, who are created in the image of God the Creator, and part of the brilliant diversity in the body of Christ.

And hopefully, one day soon, the entire Church, the body of Christ, will openly honor and celebrate and recognize Non-Binary Gender People Day!