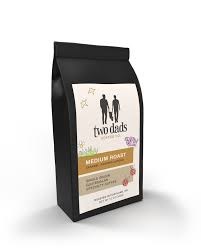 Those who know me well will not be surprised when I write that I like to drink coffee in the morning, and sometimes into the afternoon, which I am currently doing as I write this blog. I prefer a dark roast, without half and half or sugar. Along the way I’ve collected mugs as well for drinking my coffee. And wherever I’ve been on pilgrimage around the world, I’ve tasted some great coffees, from Machu Pichu in Peru, to Spanish coffee in Santiago de Compestela, as well as Huber’s in Portland and Symposium in Tigard. I am thankful that I get to live in the Pacific Northwest, with plenty of unique coffee shops to visit, whether I’m in Oregon, Idaho, or Washington.

I was recently turned on to a new coffee roaster: Two Dads Coffee, both through the LGBTQIA+ network, and by my co-worker, David Sneed.  I had read about them on-line and smiled, because the coffee company is owned by two out gay dads, Andres Lowenthal and Erik Swanson. Andres is originally from Guatemala, and he and Erik (who is from the Pacific Northwest)crossed paths in the US. When Erik went to Guatemala to learn Spanish, it was supposed to be a three-month adventure, “which turned into a three-year life-changing experience.” Eventually the two men met, dated, and married.

While Erik and Andres lived in Guatemala, they became dads through surrogacy procedure, and then moved back to the States when marriage equality was the law of the land. They finally moved to Portland, OR, one of the cities in the Pacific Northwest where the people do love their coffee and coffee shops.

From their website: “From indigenous coffee cooperatives to traditional family farms, all of our premium beans are sourced from our friends and family throughout Guatemala. We bring the beans to Portland to roast them with the same passion, love, and respect that unites our families and our respective coffee-love cultures.”

What I love about this story is that this out gay couple are able to be up front, honest, and use their status as two openly gay dads to make a living selling coffee! Amazing! Again, when I came out of my closet twenty-five years ago and was no longer hiding, all I met was the threat and, soon, the fate of losing my job at a modern major university, with charges being brought up against me in the Presbyterian Church (USA) after the publication of my book, On Being a Gay Parent (Church Pub. Co., 2008), all because I am gay and was living in a partnered relationship, with my children, in North Carolina. My former partner and I lived strictly by the motto that we would live openly and honestly but smartly as well. That meant only being open and honest with those who could not hurt us or my then-young children.

Fast forward to 2020, and here are two open, out, gay dads running a coffee company, using their status as two dads in their branding and sales pitch for their coffee.  And it is good coffee! I prefer dark roast Guatemalan coffee, and their coffee tastes wonderful.

So, here’s an idea and suggestion: I’m often asked by churches and church groups how they can support LGBTQIA+ people in their community. While I advocate boycotting fast food chains like Chik-Fil-A, because of their funding of strident anti-LGBTQIA+ programs and people, I also believe in spending money in support of people who are doing good work in this world. For years, when I served churches as a pastor, I supported indigenous coffee growers through Fair Trade coffee being used as the coffee-of-choice during coffee hour after worship, including letting people sell bags of coffee grown by indigenous people at countless Christmas fairs and fundraisers in churches. For a switch, knowing that when church folx are gathering again in buildings in the coming year, may I suggest that people buy bags of Two Dads Coffee for coffee hour after worship? It comes in both a medium and dark roast, whole bean or already ground. Support with your money a company which is being run and managed by two gay dads. That is one very real way of supporting the LGBTQIA+ community.

And, to borrow the phrase from another coffee company, I can say Two Dads coffee is “good to the last drop.”