LGBTQIA+ Young People and the Church 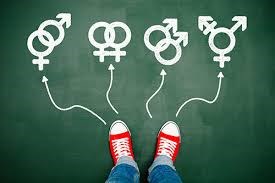 “When did you know you were gay?” is a question I am often asked in this work as the LGBTQIA+ Advocacy Coordinator. As I’ve said before on this blog and in many conversations in many church groups, I was either in the second or third grade at the time. I simply found myself more interested in young boys my age rather than young girls.

Throughout my growing up in the church—first, First United Methodist Church, Portland, where I was confirmed, then at Valley Community Presbyterian Church where I attended the youth group, and Young Life at Beaverton High School— as well as in school, the discussion of being LGBTQIA+ as a young person was never mentioned as a positive or socially acceptable way of being in this world, only as a negative. Being a “homosexual” was seen as a sin. Being a Thespian at Beaverton High School, with all the choral activities, and piano lessons didn’t help either.

Zoom ahead a few generations into the future, and in today’s world, there are more young people—those in middle school, high school, and of college-age—who self-identify as LGBTQIA+ than there have been in the previous generations. In this two year old article from the more conservative Christianity Today, they cited these percentages of young people: “While the latest Gallup poll reported only 4.1 percent of Americans—and 7.3 percent of millennials—identify as LGBT, Barna found that 12 percent of Gen Z teens described their sexual orientation as something other than heterosexual, with 7 percent identifying as bisexual. This generation is more sensitive to LGBT issues overall, with 37 percent saying their gender and sexuality is ‘very important’ to their sense of self, compared to 28 percent of their Gen X parents. Additionally, about a third of teens know someone who is transgender, and the majority (69%) say it’s acceptable to be born one gender and to feel like another.”

In other words, in most church youth groups, both in this nation and probably around the world, there are a good number of LGBTQIA+ youth. In some countries, such as the US, they may be self-identifying as an LGBTQIA+ young person, while others, here and abroad, still choose to be hidden for various reasons, which usually stem from anti-LGBTQIA+ practices and sentiments, such verbal, electronic, or possibly physical bullying.

Aware of this, Jack Jenkins of religionnews.com reported that a group of US Catholic bishops recently released a statement condemning the bullying of LGBTQIA+ youth people, insisting, “all people of good will should help, support, and defend them… As we see in the Gospels, Jesus Christ taught love, mercy and welcome for all people, especially for those who felt persecuted or marginalized in any way.” The signers noted the Catechism od the Catholic Church—which describes “homosexual acts” as “intrinsically disordered”—also calls for LGBTQ people to be treated with respect, compassion, and sensitivity… All people of goodwill should help, support, and defend LGBT youth; who attempt suicide at much higher rates than their straight counterparts; who are often homeless because of families who reject them; who are rejected, bullied and harassed; and who are the target of violent acts at alarming rates.” Finally, the signers of the document wrote to LGBTQA people, saying “know that God created you, God loves you and God is on your side.”

While this is coming from the Catholic church, I found this statement hopeful. My only hope is that such a declaration would also be made by the bishops of The United Methodist Church, and more than the Bishops from the Western Jurisdiction.

What are we hoping to do in the OR-ID UMC Conference for young people (middle school to young adults) who are either hidden or self-identify as LGBTQIA+ in 2021?

If there are any ideas that others have “out there” who read this blog, please don’t hesitate to send me an email. Let’s talk!

Are there LGBTQIA+ young people in our local UMC churches in the OR-ID UMC Conference? Yes. Are there more than we think or know? Probably yes. And they have been bullied, scorned, and some kicked out of homes and communities. Are we missing out in being a safe place, a sanctuary for them in today’s world by not talking about sex, sexual orientation, and spirituality? Most likely. Can we change this narrative? Yes. We can change this narrative through open, honest, loving, caring conversations in our communities of faith.