Spirit Alive: Why Did the Church Cross the Road?

Spirit Alive: Why Did the Church Cross the Road?

With Heart, Soul, and Mind:

Why Did the Church Cross the Road?

"...By chance a certain priest was going down on that road, and when he saw the injured man, he passed by on the other side. And likewise a Levite also, when he came to the place and saw him, passed by on the other side. But a certain Samaritan, who was on a journey, came upon him, and when he saw him, he felt compassion, and came to him, and bandaged up his wounds..."
Luke 10: 31-34
You are probably familiar with the many versions of the old riddle-joke, "Why did  the chicken cross the road?" which first appeared in print in 1847. As you know, the original answer to this question is the simple, anti-climatic response: "To get to the other side."
But over the years there have been countless variations on this original joke. In fact there is even a website dedicated to "Why did the chicken cross the road?"...and Wikipedia includes a brief history on the origin of the joke as well. Every weekday morning I do a run/walk in our neighborhood with our dog, Trinity. It is a good way to start the day. One of the constants during this time has to do with this amazing cat that regularly comes across the street to greet my dog and me. Take a look at what this morning encounter looked like recently. (Yes, you are about to see a cat video!) 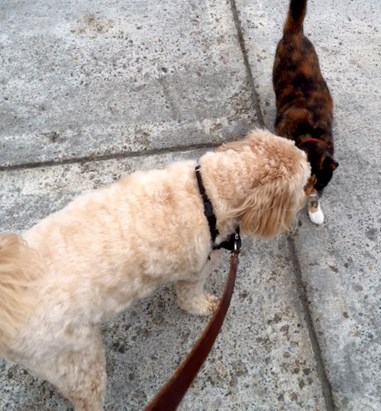 Pretty amazing, huh? You can tell from the video that this cat has absolutely no problem crossing the street and greeting our dog. By normal standards of behavior you might assume that such an interaction would not take place,since cats and dogs usually don't get along with each other.
But there isn't any anxiety nor fear going on here. And while I don't know about what a cat's sense of judgment is toward others (including dogs), there doesn't seem to be a wall going up in this interaction.... nor any of the other encounters that take place between this cat and our dog each day! In fact, I don't know if this cat is a proverbial Republican or Democrat, metaphorically whether this cat would represent a person of color or a Caucasian on the inside...nor if the cat sleeps outside or has a beautiful house to call home. What I do know is that this cat is consistently willing to cross the road in order to greet us every day. And for me, it is a great way to begin the morning!
But with humans, we aren't always so eager or willing to do this. Sometimes, like the Levite or the priest, it seems to be easier to stay on our own side of the street rather than to make the effort to travel across. In fact, sometimes we segregate ourselves from one another in such a way that it becomes difficult to cross the street and get to know each other.
Years ago, when I worked at United Way, I attended several national conferences in Alexandria, Virginia near Washington, DC. Each time I went there, I was always amazed by the walk from my hotel to downtown Alexandria. You see, on one side of the street there were a number of large, scattered apartment buildings that housed a predominantly African-American population. There were lots of children outside running around between the buildings. People were firing up their barbecues. And, lots of conversations were taking place.
On the other side of the street, there were a number of very nice homes hidden behind walls of bricks and foliage. I couldn't really see over the walls, but there didn't appear to be a lot of activity going on in the yards, and there no evidence of interaction taking place between the neighbors on that side of the street.
These appeared to be very different worlds. I never remember seeing people from either side of that street crossing over to the other side. In fact, if someone ever did go to the middle of the street, they probably would have been "laying it on the line!" During my visits there, I'd walk down one side to town and come back on the other side, but never ventured into either of these two worlds. My guess is that people in Alexandria probably didn't do that too often themselves. How does your congregation cross the road? What do you do when you travel to the other side...and what do learn about others...and yourselves...in the process?
Blessings on your journey,
Lowell
Spirit Alive is a twice a month blog and email by Rev. Lowell Greathouse, Mission and Ministry Coordinator for the Oregon-Idaho Annual Conference. It seeks out where the spirit is alive in our congregations and communities.
comments powered by Disqus