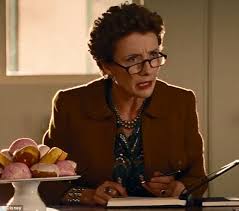 I am so mad at the Academy – and by the Academy I mean the Academy of Motion Arts and Sciences.  Did they really skip over nominating Emma Thompson as Best Actress for her amazing depiction of P.L. Travers in “Saving Mr. Banks”? And for that matter, why wasn’t the movie nominated for Best Picture?  Jeeze.  Sometimes there’s just no justice in the world (and yes, I see the irony in my last statement…but hey, I grew up near Hollywood, what can I say?  "Justice" is loosely defined in So Cal).

But back to “Saving Mr. Banks.”  For those of you who haven’t seen it, the movie is loosely based on the real-life story of how Walt Disney persuaded – and some might say hounded – P.L. Travers into letting him make her book into the wonderful movie “Mary Poppins.”  Travers is hardly a sympathetic character  - she is negative, rigid, and slow to laugh.  She is extremely protective of her beloved Mary Poppins and exudes not an ounce of generosity in helping Poppins come to life.  After her passing in 1996 her grandchildren said, “Travers died loving no one and with no one loving her.”

The movie attempts to let the audience know what might have caused Travers to become the person she was.  We see evidence of a happy childhood gone terribly wrong.  She could count on nothing to stay the same and she was thrust into the role of adult when she was a child.   But when she created Mary Poppins, she had the feeling she had found her security and perhaps her childhood as well.  Through her actions, she tenaciously clung to her past while simultaneously trying to shed it.

It might be like this with some people in your congregation.  Not that they have a “Mary Poppins” outlook on life (wouldn’t that be great?) but that they relate more to the real-life P.L. Travers.  You probably have some souls who come in week in and week out to church and never give financially or give the very least that they can.  The question is:  Why?  Whether it means a change in attitude or not, having people understand their own story, their own relationship with money is critical.  I sometimes wonder if some people are born with a generosity gene – while others of us, including myself, must work at it.  Those lucky people who “get it” are a gift to the rest of us who must be reminded of the joy that a generous spirit can produce. Sometimes it takes effort not to become a P.L. Travers.

Perhaps you can take a moment at a meeting, in a Sunday School class, or during a sermon to ask the questions:

“What is your story around money?”
“Who in your family of origin was generous?”
“What kind of generous person do you think Jesus is calling you to be?”

Maybe, just maybe, if you can help others to do some self-reflection that generosity gene will begin to emerge in ways that will amaze you…and the dancing penguins too.

Cesie Delve Scheuermann is a consultant in stewardship, development, and grant writing.   Over the past decade, while working as a volunteer and part-time consultant, she helped raise nearly $2 million dollars for numerous non-profit organizations.  She served as the Oregon-Idaho Annual Conference Lay Leader from 2008-2012.  Her position with the Conference is funded through a generous grant from the Collins Foundation.  You can reach her at inspiringgenerosity@gmail.com.  “Mary Poppins” is the first movie she ever saw in a theater.  She has been hooked on movies ever since.