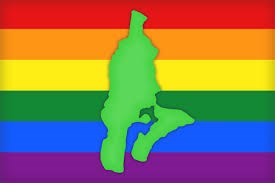 Last Saturday, my partner Christian Halstead and I had a chance to visit the Vashon Island Heritage Museum on Vashon Island. The Museum was housed in a former Lutheran church, one of the oldest church buildings on Vashon. The front half of the Museum was dedicated to the native people who lived on the Island before white settlers—farmers, actually—came and moved onto the Island. Today, it is a lovely Island with wineries, a cute downtown with lovely boutique stores, restaurants, bookstores, and pubs.

In the back half of the Museum was the special exhibit space, which was “In and Out: Being LGBTQ+ on Vashon Island.” One entered the exhibit through, literally, a closet door, in which there were men’s clothes hung up, along with some drag queen outfits and a table with cosmetics on it. Once through the closet door, there were plaques on the wall that described, chronologically, the place and presence of LGBTQ+ people on Vashon Island, starting with the late 19thcentury to present-day Vashon Island.

Why this focus on LGBTQ+ people? Vashon Island has the largest per capita concentration of LGBTQ+ people in the state of Washington.

One of the “plaques” featured on the wall under “Affirming Church” was this plaque:

“In 2005-6, Vashon’s Methodist church was led by Rev. Nancy Yount. She was well-liked, but the congregation divided when her partner moved into the parish house.  Today, this church is among the most affirming of same-sex relationships, despite a global conference ban on ‘self-avowing homosexuals’ as pastors.”

I stood back from the plaque and realized that this was the story of probably every church on Vashon, though no other church was singled out. I can imagine Presbyterians, Lutherans, and UCC congregations on Vashon also experienced their painful wrestling with the place and presence of LGBTQ+ people in congregations.

Of course, what was sad and painful to read about was that, 15 years ago, while the congregation liked Rev. Yount, and probably knew she was a lesbian, though it may not have been discussed openly, half the congregation didn’t like it when Rev. Yount’s partner moved into the church-financed “parish house.” That was crossing the line. It was one thing to be LGBTQ+. It’s another thing to live it out and invite one’s loved one to move into one’s home and create a loving home together. That was one step too far in living honestly, truthfully, and openly.

I was glad to read that this church is a Reconciling Church, “despite a global conference ban on ‘self-avowing homosexuals.’” Again, that was sad and painful to read.

And here’s the thing: I work within a United Methodist Church context, and I understand intimately the brave and heroic stories of those who lived openly and honestly with their partners and lovers, before we who are LGBTQ+ were given “permission” to wed. I understand what my former-partner and I lived daily before that, too, in which we lived “honestly, but smartly,” choosing carefully who to tell our story to, and when it was smart and best to be silent. Personally, I also know the power of gossip to ruin one’s career after my former-partner moved into my townhouse in North Carolina while I was teaching at a major research university’s seminary. While we chose to live together, and tried to do so quietly at first, knowing that certain people in our lives could not live with the truth of who I am, along with days of love and joy, it was also a season of heart ache, deception, and an unleashing of hate towards me as a gay man, the likes of which I’ve never seen before from a Christian context.

In the months and years to come, I hope that more UMC pastors, lay leaders, and laity will be able to tell their stories of what happened before the anti-LGBTQ+ words are taken out of the Book of Discipline. Perhaps we can start a “story project” in the OR-ID UMC Conference of LGBTQ+ clergy, lay leaders, and lay members, collecting the stories of the heroic individuals who lived out their truth openly, or those who lived out their truth openly yet smartly, or lived as an LGBTQ+ quietly while supporting other LGBTQ+ people surreptitiously.

My thanks to Rev. Yount and her partner for living out their truth.

My thanks to the Vashon Heritage Museum for sharing their story.

My thanks, to God, that, hopefully, we are coming to a new day in the UMC.