A few weeks ago, sailor Bryan Woodington came home to Jacksonville, Florida, after seven months at sea on the USS Sullivan, and kissed his husband Kenneth, dipping him, like the iconic V-J Day kiss in New York City’s Times Square in 1945. The photograph, which showed both on Facebook and a local television network news feed, while garnering much praise, also drew critics and negative responses by those who were offended by two gay men kissing. All this, because two men kissed, and the picture went around the world. 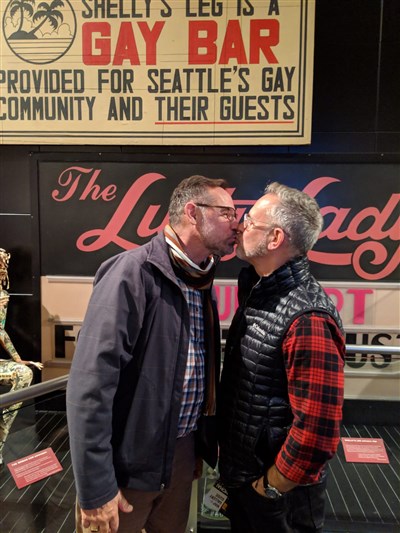 Recently, my partner Christian and I toured Seattle’s Museum of History and Industry (MOHAI), which tells Seattle’s complicated history in fun, interactive ways. One of the exhibits was a display of old signs and billboards for the LGBTQ community when it was more “hidden” along the streets of Seattle. For “old times’ sake,” and to show that times had changed, we kissed in front of some of the old signs, and photographs of our kiss were taken by an anonymous passer-by. He thought nothing of two men kissing, and instead told us of a more interesting exhibit was down the museum’s corridor.

When it comes to two people in love kissing, apparently context matters. While Bryan and Kenneth’s kiss created a stir, my kiss with Christian in Seattle’s MOHAI brought no attention, with the additional caveat that there was a far more interesting exhibit down the museum’s corridor. I smile and sigh as I write this, because a decade ago, in 2009, I was told by my then-Presbyter Executive of the Presbytery of New Hope (North Carolina) that I, as a Minister of the Word and Sacrament, could not be seen holding hands or kissing my then-partner on the streets of Chapel Hill, Durham, or Raleigh, NC. Nor should I be seen holding hands or kissing my then-partner in front of a plate glass window of our home without the drapes drawn. Why? Because the Constitution of the Presbyterian Church (USA) forbid out LGBTQ people from being ordained, let alone married and serving a church as a Minister of the Word and Sacrament. Such evidence of being an out-LGBTQ person, like kissing or holding hands with another man, could lead to my being censured or defrocked. Thankfully, we changed our Constitution in the Presbyterian Church (USA) a few years ago, making it safe for me to be an out clergyperson and free to serve a church. Just like Bryan and Kenneth, Christian and I are free to kiss wherever in this country. And it is now safe to kiss and hold hands in a church, among other congregants, just like a straight couple can, whether one is ordained in leadership and service or not.


Herein lies my hope: as I write this, I recognize that many of my sisters and brothers who are LGBTQ and ordained leaders in the United Methodist Church, let alone some members of a local UMC congregation here and abroad, are not universally allowed to show signs of personal displays of affection like kissing or holding hands of the one they love. My hope is that this barrier will be breached in the coming month, and that soon, even in a UMC church, people who are in love can show displays of affection, whether the couple is straight or LGBTQ . After all, all we are showing is love.