Greater NW Pride: Being a Person of Faith, Queer, and Civic Minded

Greater NW Pride: Being a Person of Faith, Queer, and Civic Minded 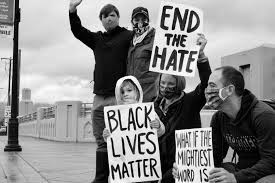 Being a Person of Faith, Queer, and Civic Minded

I am part of the Portland Interfaith Clergy Resistance (PICR) group.

The group started to come together in Portland during the Black Lives Matter protests that started soon after the death of George Floyd in May 25, 2020.

There are several friends in the movement who are clergy and queer who were noticing how some in the Portland Police Bureau (PPB) were especially brutal to people of color, hitting people with batons, intimidating, pushing people. Said my friend UCC pastor Rev. Tara Wilkins, who is a lesbian and local activist, pastor of Bridgeport UCC in Portland, “we wanted to model ourselves after the ACLU observers and to say, ‘We’re bringing the moral voice to the street.’” We are also civic minded, and believe we have a role and function in the politics of Portland.

One of the other organizers of the group is Rabbi Ariel Stone, an LGBTQ+ ally, of Shir Tikvah, an independent Portland synagogue that meets at Bridgeport UCC. She convened the PICR, in which one of our members is downtown each night and able to report back on what one sees or hears, like the use of tear gas, arrests of protestors, or someone being pulled into an unmarked SUV.

“We stand in that liminal space between the violent cops and City Hall and we try to be not only a witness, but a support to those in the streets and to reassure them that their voice is the prophetic voice of our time, calling out for justice.”

We understand our role as clergy not as leading the demonstrations, but to watch and advocate for marginalized people and make sure our voices are heard. “We know what it is like to be marginalized. We are supporters. We can rally resources. We can witness.”

Last Wednesday, July 29, 2020, around 8:30 pm, a group of clergy leaders and people of faith were led by queer activist Rabbi Debra Kolodny (Ex. Dir. of Portland United Against Hate and the Unshul), in an annual feast day remembrance of Tisha B’Av, in which the people of Israel remember the destruction of the First and Second temples in Jerusalem. This hour-long candle-light vigil was held in the courtyard in front of Portland City Hall, and over 100 people were there. In light of the Federal troops in Portland, the language of “storming the gates” from the service, a lamentation that rose from the people who watched the Temples destroyed, was poignant. There wasn't a dry eye by the end of the vigil.

From the plaza in front of City Hall, many of us then walked over, across the street, through a park, to the Justice Center, to hear some of the various speakers who are part of Black Lives Matter Portland movement. It was amazing to see the rich mixture of people present that evening: Queer, allies, people of all races and ethnicities, of all ages and family groups, various religious backgrounds and non-religious folk, were engaged, united, in this act of citizenship, that is, the art of protest, freely assembled together. We were practicing our Constitutional right as people of faith, many of us who are queer or LGBTQ+. It was an awe-inspiring evening to behold.

“Injustice anywhere is a threat to justice everywhere. We are caught in an inescapable network of mutuality, tied in a single garment of destiny. Whatever affects one directly, affects all indirectly,” wrote Martin Luther King, Jr., in his Letter from a Birmingham Jail.  Or to quote the Apostle Paul, "If one member suffers, all suffer together with it" (1 Cor. 12: 26, NRSV). Those of us who are LGBTQ+, and clergy, have felt the sting of injustice, personally and as a group, for a long period of time. Because of our status as outsiders and the marginalized, those of us who are LGBTQ+ and people of faith know what it is like to live in a system of injustice and “outsider” status, whether in our religious communities in particular, or the government and society in general. Because we are tied together in a “single garment of destiny,” we are affected if one person is treated differently because of the color of one’s skin, who one loves, or one’s economic background.

We show up, night after night, in purple vests that say, “Clergy Witness.” We rise up and stand alongside others who are treated unfairly and feel the sting of injustice day after day. We rise in solidarity with each other, promoting the core principles of justice and faith, calling out for people to respect one another. And we seek justice, demanding that everyone is treated as equals in the City of Roses, part of the Beloved Community (Martin Luther King, Jr., and John Lewis), as people who are all holy because we are all created in the image of God.