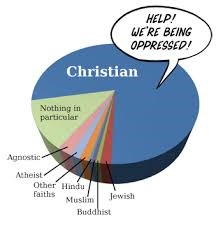 Christian Privilege in the COVID-19 Pandemic

In writing this blog, I write it as a white, cisgender, Christian, gay, able-bodied, middle-class man in a partnered relationship. I am a living intersectionality of many “privileges” in this American life. Admission: Being white, cisgender, middle-class, partnered, and male is an enormous privileged class in Portland, in which being gay is, in some circles, even more of a privilege than being non-LGBTQ+, save for some churches and denominations.

But the one “privilege” that has risen to the top of many of these privileges lately is Christian privilege. In reading news reports from cable news shows on TV, to reading news on-line from New York Times, Washington Post, Daily Kos, Alternet, Raw Story, Joe My God, CNN, MSNBC, and now and then the Onion, all point to this phenomenon of Christian privilege.

One example of Christian privilege early on in our world had to do with the so-called "War on Christmas!" Some broadcasters and politicians believed that Christmas was being denigrated if not denied by and in a multicultural society in which "Happy Holidays" in mixed company would include those of other faiths who were celebrating their religious holidays."Not fair!" said the pundits and politicians. And so, a "War on Christmas" was created, even though no war in this largely Christian country was afoot.

There is just a sense among some who call themselves "Christian" that they are being "ghettoized" and "tyrannized" during the COVID 19 pandemic.

Recently, Christian privilege came roaring back with force, with pastors of largely non-denominational evangelical churches and some mainline churches, from Florida and Kansas to California, wanting and demanding the “right” to hold in-person worship services at their respective churches regardless of the stay- or shelter-at-home government orders in their respective states, taking such cases to various county and state courts to press their case. Granted, many of these churches are part of a radical religious right wing of the Church, nevertheless, people who declare they are Christians.

What can happen when a group of religious folk get together for singing and prayers? Consider the following story: some of the religious and choral groups who met early on in the beginning stages of the COVID 19 pandemic are bearing a great loss now. Before we knew much about the virus, the Skagit Valley Chorale, an area-wide chorale that met at Mt. Vernon Presbyterian Church, in Washington state, north of Seattle didn't see any harm in gathering to sing together. They gathered together for a chorale rehearsal on March 10, 2020, with plenty of hand sanitizer. Eleven days later, among the 56 who gathered that evening, a handful were infected by COVID 19, several were hospitalized, and one person died. There are similar stories of other faith communities who met after March 10th, in which, again, those who thought they would never contract COVID 19 became sick, and, in some cases, died. It was unknown at that time how easily the COVID 19 passes on to people through simply breathing, and particles of the virus landing on surfaces which we then touch. One rub of an eye, and we are possibly infected by the virus.

And by the way: county and state courts in some parts of this country are with the churches in terms of the right to open up and have worship services, and not with the Governors.

Or consider Samaritan’s Purse, a non-profit run by Franklin Graham, the late-Billy Graham’s son. Samaritan’s Purse set up a 68-bed field hospital in Central Park, New York City, working with Mt. Sinai Health System, based in NYC. The controversy around this non-profit organization is the statement of faith that all volunteers are required to adhere to, which says, “marriage is exclusively the union of one genetic male and one genetic female.” A Mt. Sinai spokesperson said that Samaritan’s Purse will “adhere to Mt. Sinai’s principles and guidelines when it comes to not discriminating against patients or staff…In short, while our organizations may have differences of opinions, when it comes to COVID-19 we are fully united: We will care for everyone and no patients are staff will be discriminated against.”

Again: from what I’ve read, Samaritan’s Purse has not denied their Statement of Faith is or is not still being used with the field hospital in NYC. I assume it is still in place.

While many, if not most, of the mainline Protestant denomination churches and the Roman Catholic Church have stressed stay-at-home and shelter-at-home policies, with many churches either taking their video abilities to new heights or, in some of our cases, learning to Zoom with no one hacking into our Zoom time together, there is a growing sense among other Christian organizations of a certain privilege that thwarts both common sense and the laws of the land, all under a “First Amendment” right: “Congress shall make no law respecting an establishment of religion, or prohibiting the free exercise thereof; or abridging the freedom of speech, or of the press; or the right of the people peaceably to assemble, and to petition the Government for a redress of grievances.”

By the way: These people who are using the First Amendment as their argument to “assemble” during the COVID 19 order to stay- or shelter-at-home are the very ones who the very same people arguing that they have the right, as Christian business owners, to discriminate against LGBTQ+ people in their businesses, from making wedding cakes to floral displays. They understand that who they sell their cakes and flowers to as a “freedom of speech” moment.

So, as we move forward as Christians in our mainline churches, with our internet worship services and Zoom meetings, just know that we, who are Christian, and our churches in this country, do have certain privileges that other communities of faith and religions do not openly enjoy in this country. Religious organizations, like the Church, have the permission of the courts and laws in and of this country to discriminate against people because of their race, ethnicity, gender, and sexual orientation.

After all, this is what Christian privilege is all about.