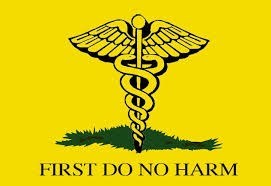 First, Do No Harm and LGBTQ+ People

While our divided and undivided attention is focused on the local and national response to COVID 19, it is important to remember that in other parts of the government, business is being done in our name. Several offices have not shut down, even if people are obeying a shelter-in-place order. And works of justice, or injustice in this case, are proceeding as if there was no COVID 19 pandemic.

For example, the Trump administration removed a policy put in place during the Obama administration that protected LGBTQ+ people from any discrimination in terms of health services. Removing this non-discrimination policy would hurt vulnerable people, whether in a pandemic or not.

To quote from Politico.com: “The (Department of Health and Human Services/DHHS) is close to finalizing its long-developing rewrite of Obamacare’s Section 1557 provision, which barred health care discrimination based on sex and gender identity. The administration’s final rule on Thursday was circulated at DOJ, a step toward publicly releasing the regulation in the coming days, said two people with knowledge of the pending rule. The White House on Friday morning also updated a regulatory dashboard to indicate that the rule was under review. Advocates fear that it would allow hospitals and health workers to more easily discriminate against patients based on their gender or sexual orientation.” Other publications also cite such a reversal of protection for LGBTQ+ when seeking health care services.

That means me as a gay man, as well as my siblings who are lesbian, bisexual, transgender, queer, questioning, pansexual, asexual, and intersex.

The Obama administration created these non-discrimination policies because there was fear in the health community that LGBTQ+ patients were being turned away from necessary care “or intimidated from seeking it out.” The people most recently discriminated against by the federal government are those of us who are transgender, as well as women who had abortions.

Yet these protections against discrimination were blocked in 2016 by a federal judge. And the Trump administration has south to further weaken the rule before it could be fully implemented.

On what basis was this policy blocked? Under the religious freedom rule. That’s where the Church comes in to play.

And that’s why I’m blogging about it: because I work for and am part of both the United Methodist Church and the Presbyterian Church (USA).

From NBC, “the rule, Protecting Statutory Conscience Rights in Health Care, revises existing HHS regulations to ensure vigorous enforcement of Federal conscience and anti-discrimination laws” and strengthens health care workers’ rights so they are “free from coercion or discrimination” on account of their “religious beliefs or moral convictions.”  This is part of the religious freedom cover-up, in which people of "faith" are able to hide their acts of discrimination against LGBTQ+ people behind the "skirt" of "religious freedom." And if they can discriminate against LGBTQ+ people because of "religious freedom," then they can also practice being racist, ageist, ableist, and sexist under this claim.

In other words, if I, as a Christian, believe that LGBTQ+ are an “abomination” and living an “ungodly life,” and I work in health services, I can deny medical and health services to LGBTQ+ individuals.

Learning to live with the new-normal of COVID 19 among us, we fret about whether or not we can meet in the same space for worship, focus on serving the needs of others in our communities who are less fortunate, and more clearly see the way our already splintered modern society is providing health care to people based on race, gender, and socioeconomic class. Yet with the onslaught of COVID 19, let us be mindful that a wall on our southern border continues to be built. ICE agents are still at work, arresting those who have come to this country in search of freedom and economic sustainability. Global climate change is still taking place, though perhaps slowed a little bit because of the lack of carbon dioxide being produced by us in such huge dosage. And LGBTQ+ people are being openly and constantly discriminated against in the terms of health services, in the midst of a pandemic, no less.

To quote the UMC baptismal vow, the work of the Church is "to resist evil, injustice, and oppression in whatever forms they present themselves." It is time to resist this evil, unjust, and oppressive action against LGBTQ+ people in the US. As Christians, both LGBTQ+ people and non-LGBTQ+ people of faith, we can and should all get behind this rising injustice and make our voice known. Call or email your US Representative or US Senator, asking for all people, LGBTQ+ and non-LGBTQ+, to be provided health care services, regardless of the practitioner’s personal religious conscience and regardless of the person's sexual orientation.

After all, as the ancient Greek physician Hippocrates admonished those in the health profession, “First, do no harm.” It would be wise for all health care workers, regardless of their religious affiliation, to heed these wise words. "First, do no harm,"  includes all LGBTQ+ people as well.