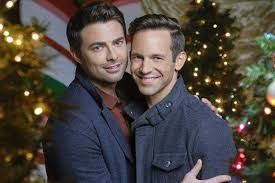 Gay Hallmark Holiday Movies and Me

While I was aware of the presence of Hallmark movies during the pre-cable days, when television merely had stations—yes, I’m that old—I’m also aware of the Hallmark Channel that can be streamed, with 24/7 viewings of Hallmark movies, along with Lifetime, Amazon Prime, Hulu, TLC, HGTV, and Bravo. The formulaic script for these Hallmark Hall of Fame movies are well known in our middle-class, white, suburban, straight, cisgender society. By and large, the movies on these channels reflect their viewing audience.

While I would watch a few minutes of these movies from time to time over the years, it wasn’t until I watched a few of these movies with my mom in her adult foster home that I watched some of the movies from beginning to end. I learned the formula well enough that I understood you could fall asleep in one movie and wake-up a few hours later and figure out where people were in the plot of another movie with little problem. Different people who look a lot alike, but same plot, scenery, and music, with the same commercials in between.

Martha Sorren of refinery29.com summed it up fairly well: “While this year (2020) introduces me to a few new tricks, we have a lot of old standbys in the mix, from o’ reliables like opposites attract and heading home for the holidays, to recent obsessions like the inclusion of vaguely royal characters and journalists as romantic heroines. And while it sounds impossible, each of these 12 categories (there are 12 themes that replay themselves in all Hallmark movies), have more than one movie that matches, and some have several. I checked my list twice. Some movies are even overachievers and weave their plots through multiple categories. There’s even one that features a single dad (check!) who comes home for Christmas (check check!) and reconnects with a childhood sweetheart (check check check!).”

Hunting for a “feel good holiday movie” over the past few days with LGBTQIA+ characters during Thanksgiving, my partner Christian and I stumbled upon “Friendsgiving” on Amazon Prime, Paramount’s “Dashing in December,” “Dash and Lily” on Netflix, “Happiest Season” on Hulu, Lifetime’s “The Christmas Set Up,” and “The Christmas House” on the Hallmark channel, to name but a few. As I wrote in an earlier blog, last year we were happy, then appalled, then happy again when a jewelry commercial was on, then taken off because of public pressure, and then on again because of more public pressure, all because the advertisement featured a lesbian couple getting married on one of the above channels. This year, we have, well, options! All in a year.

We settled on watching “The Christmas House.” It featured a former gay (though he is straight) heart throb, Treat Williams, who, along with Sharon Lawrence (they play husband and wife) are questioning whether their marriage is a “go” or to separate and live in different cities. They apparently live in this beautiful home that has been the designated “Christmas house” in a city in upstate New York, filled inside and outside with every Christmas decoration (save for anything too religious) every Christmas, and invite their grown sons home for one more Christmas. One son is straight, played by Robert Buckley, and the other son is out and openly gay and in a partnered relationship, played by Jonathan Bennett and Brent Harder (their picture is above). Robert Buckley’s character meets an old girlfriend, played by Ana Ayora (typical fare for Hallmark holiday movie, check). The gay couple’s secret that the family doesn’t know about, but which will be revealed in the series? Well, this was refreshing! No one was coming out of the closet or no longer remaining hidden. Everyone seemed at ease with the gay couple. And no one was dying of HIV/AIDS related disease. Both of these tropes were constantly played in earlier television series, movies, and plays. Their secret was fun: They were expecting to adopt a baby, becoming dad and pops! And Treat and Sharon’s characters stay together (check, check) and were thrilled with becoming grandparents! And Ana and Robert’s characters get married, and live happily ever after, too, with Ana’s son from a previous marriage (check, check, check!).

As has been stated by the team behind the recent re-boot of the series, “Queer Eye” on Netflix (note it is no longer "Queer Eye for the Straight Guy"), the audience for these Hallmark Holiday movies tends to be “middle America,” focused on an audience that lives somewhere between the two coasts, in which there is a more conservative population in terms of politics, cultural norms, and communities of faith. Yes, a lot of church-going folks are not only being exposed but watching and learning from these series about LGBTQIA+ people and our perspective in the world. In a nutshell, what these shows are doing is an incredible, subversive cultural “evangelism”: They are introducing LGBTQIA+ characters who are, well, more or less, “normal” (this word has a lot of baggage to it, I know). The LGBTQIA+ individuals, couples, families, and friends in this series of films and series have a place and presence in middle America, with all the moms and dads, children and grandchildren, with their ups and downs of normal life.  Most importantly, one’s being LGBTQIA+ is notthe “issue du jour.” We who are LGBTQIA+ are simply part and parcel of the village, town, neighborhood, or city, wherever the television series or movie is set in.  The absence of the drama or comedy of being LGBTQIA+ in these films and television shows, being the center piece, was, to say the least, refreshing! Nice! Even banal!

How I wish I was privy to some of these stories and role models when I was younger, of an "impressionable age," and was trying to figure out who I was in this world with all the hormones and feelings and questions raging within me.

In the US, by the time The United Methodist Church finally makes a move and officially, formally welcomes LGBTQIA+ people for ordination, marriage, funding of our programs, along with our families, friends, and networks in 2021 or 2024, my hunch is that the rest of this country will have moved on, in terms of accepting as "normal" and not a big deal, the place and presence of LGBTQIA+  people in one's midst. While the Supreme Court of the US—which is too conservative now and out of step with middle America—may continue to try to curb our place and presence in American society, I’m carefully watching Hallmark Holiday movies to be the bell-weather of where this nation is in terms of the soul of its people, and the habits of the hearts. Legislation will follow. So will the Supreme Court. And so will the Church. You see, once these shows are produced, every Christmas season, they all come back, and continue to educate the masses. And what are they teaching Americans? That LGBTQIA+ people are all around them, living “normal” life, falling in love, getting married, raising children, going to work, facing mid-life crises, getting old, retiring, and, why yes, some even to go church or to temple.

“And they all lived happily forever” (well, sometimes).