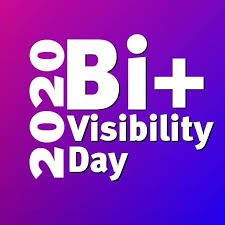 While not readily advertised or celebrated in many churches, there are many people who would self-identify as bisexual, or perhaps pansexual, on this day, were our churches a safer place to be “out” and part of a community of faith.

What or who is a bisexual? After all, it is the “B” in the LGBTQI+ alphabet.

This attraction doesn’t happen at the same time, in the same fashion, and not to the same intensity per person.

Or to use the work of social scientist Dr. Alfred Kinsey, sexual orientation is on a sliding scale, from being non-LBTQI+ on one end, and then everything in between. And there are gradations on this scale. And our sexual, emotional, and romantic attractions at any one time in life can also change on this spectrum as well.

Being bisexual is pretty much in the middle of this scale. And that's wonderful! As are you!

It’s just another way of being in this world; a reflection of the God who made, whose image we reflect. After all, God is LGBTQIAP2S+, and non-LGBTQIAP2S+.

And according to the Human Rights Campaign (HRC), they wrote that, “according to the Williams Institute,and the HRC Foundation's own research, studies suggest that about 50 percent of people who identify as either gay, lesbian or bisexual, identify as bisexual. This makes the bisexual population the single largest group within the LGBTQ community.”

Being or self-identifying as bisexual doesn’t mean that a person is in a “phase” or making a “pit stop” before becoming or being someone who identifies as being gay, a lesbian, or transgender. It is an authentic, real way of being in the world. Let's celebrate!

Some people who are pansexual will tell others that they are bisexual, just because some people who are non-LGBTQI2SA+ can’t quite figure out the nature of pansexuality. A person who identifies as pansexual is not limited in being attracted to another person because of another person’s biological sex, gender, or gender identity. The person who is pansexual is simply attracted—sexually, romantically, and emotionally—to the who the other person is in this world, regardless of all the other social constructions. There is a Pansexual Visibility Day, too! Woohoo!

Let’s celebrate and toast those among us who self-identify as bisexual! You make our LGBTQIA+2S+ world more full and brilliant! We thank God for being who and whose you are!