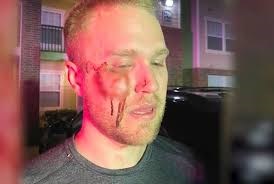 On June 29, 2020, Christian Council, an Oklahoma City realtor, was beaten up and left unconscious by two people, Amery Dickerson and Bennett Stone, who used anti-gay slurs as they hit him in the head.

I have seen pictures of Christian’s beaten face on several of the LGBTQ+ sites that I go to daily, e.g., Towleroad.com, Queerty.com, and Advocate.com.

Christian and a friend arrived at his home in an apartment complex. As they tried to park the car, a truck was in their way. They honked at the car blocking his parking space, and the truck moved, and after he parked, he got out of the car when two people approached him, who were waiting behind his car.

They saw the men and said, “Oh, are you two a couple of (gay slur)… It was clear that when they could tell my friend and I were gay, or that we appeared to be ay, they knew they could do what they did to me.”

Christian said they yelled the gay slur during the entire attack.

Dickerson and Stone “were arrested for misdemeanor assault and battery, but were released without being booked into the county jail,” said a reporter from television station KFOR.

Looking at Christian’s face on-line, and reading this story, I wince. I cringe. I can’t imagine the pain of being hit in the face for any reason, let alone because I am gay.

Christian is a victim of a hate crime. And the hate? Someone hated him and his partner simply because of their sexual orientation.

What is a hate crime? According to the Federal Bureau of Investigation (FBI), a hate crime “is a traditional offense like murder, arson, or vandalism with an added element of bias. For the purposes of collecting statistics, the FBI has defined a hate crime as a “criminal offense against a person or property motivated in whole or in part by an offender’s bias against a race, religion, disability, sexual orientation, ethnicity, gender, or gender identity. Hate itself is not a crime—and the FBI is mindful of protecting freedom of speech and other civil liberties.”

Some people hate us simply because of our gender, the color of our skin, our religion, our gender identity, or our disability.

Hate crimes motivated by bias against sexual orientation and gender identity are illegal under the 2009 Matthew Shepard and James Byrd Jr. Hate Crimes Prevention Act. But state laws aren’t so clear cut. An estimated 53% of LGBTQ+ adults live in states that don’t have hate crime laws covering sexual orientation and gender identity. Oklahoma is one of the states that doesn’t have a hate crime law.

In a USA Today report by Grace Houck, in 2019, hate crimes against LGBTQ+ people have been on a slight rise over the past three years, according to FBI data. “While most hate crimes in the US are motivate by bias toward race and religion, the number of crimes based on sexual orientation rose each year from 2014 to 2017, when 1,130 incidents were reported. Of those crimes, a majority targeted gay men…and in 2019, 11 transgender people (were) fatally shot or killed by other violent means, according to Human Rights Campaign (HRC).”

“The National Crime Victimization Survey (NCVS), a household-based survey administered by the US Census Bureau (with) self-reported data suggests that Americans experience closer to 200,000 hate crimes each year—a far cry from the FBI’s estimate of approximately 7,500 (annually).”

The reason I bring all this up in this blog is because my quiet time reflection this morning was centered Luke 6:27-28: “Love your enemies, do good to those who hate you, bless those who curse you, pray for those who abuse you.” And all I could see was Christian Council's battered face.

While those of us who are LGBTQ2S+ people of faith are called to do no harm, and to resist evil—and a hate crime is harmful and evil—we are also called to pray for our enemies. We are to do good to those who hate us, which is usually because of our faith. Jesus goes so far as to say, “love you enemies.” While some would interpret this to be “hated us because of our faith,” I think it also concerns hating us because of who and whose we are as people created in the image of God and members of Christ’s body.  For better or worse, we, who are LGBTQ2S+ and people of faith are, quite often, in the role of teaching others the unique art and practice of grace, faith, joy, and love in the face of constant adversity.

So, here is what we do as LGBTQ2S+ people, and how I interpret this Scripture as an LGBTQ2S+/gay man who is a person of faith. While I don't know whether or not Christian is a Christian, as a Christian, and as a member of Christ's body, I pray for Amery and Bennett, and that their hearts, minds, and bodies would be open to being shown what their sinful actions caused, which comes from their warped and narrow sense of humanity. And if Christian can't pray, I, as a member of the body of Christ pray that some day they will be open and welcome to all, including LGBTQ2S+ people. As a member of Christ's body I pray that someday they will see the errors of their actions, realizing that actions have consequences, and that they will be held responsible and accountable for those actions in court. And, when the time is right, and they wish to make peace with me, confessing their errors and lack of education, I would be open to reconciliation and peacemaking.

This is hard, if not impossible to pray by myself. And I need the community to remind me to love my enemies.

That's why I, too, need the body of Christ to pray with me, if not for me, at times.

And I rest and comforted in this truth: Love, which is God, always is the last word, and the last note, and the last dance. Hate, and hate crimes, always fall apart.

** 2S is an abbreviation for “two spirit,” refers to a person who identifies as having both a masculine and a feminine spirit, and is used by some indigenous people to describe their sexual orientation.