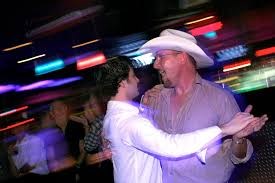 In a recent, year-end, issue of Portland’s alternative newspaper, Willamette Week, there was a review of the changes in Portland in 2020 since the arrival of the COVID 19 pandemic. New leaders sprung up around the city. New habits we have picked up (masks, anyone?). New issues came to the light of day that had long been hidden. And landmarks around Portland had closed. One of those landmarks is well-known in the Portland LGBTQIA+ community: CC Slaughters.

Reporter Shannon Gormley wrote this about the iconic gay hang-out: “For almost four decades, from the Reagan years up through the legalization of same-sex marriage, the Old Town gay bar (CC Slaughters) served as a gateway to Portland's LGBTQ+ nightlife…CC's, as it was known to regulars, stayed packed each weekend, hosting drag nights and dance shows. When neighboring (LGBTQIA+) club Embers closed after a half-century run, in 2017, CC's became the largest gay bar in the city.”

A few weeks ago, CC’s announced its closure on Facebook. Many of us remembered, with fondness, a memory or two we had of meeting friends, having a drinks, and dancing late into the night and early morning in this iconic establishment.

But Gormley also captured something else that was important about CC’s and other LGBTQIA+ bars. When churches, mosques, temples, and synagogues were not open to the mere presence of out and open LGBTQIA+ people, shunning us, if not outwardly excommunicating us and our family and friends, or implicitly ignoring us, many found a sanctuary, a safe space, in places like CC’s, in which people could be themselves, out and proud, with no apologies, or fear of being “found out.”

"My brother's partner took me here over 10 years ago, dragged me up to Bolivia Carmichael and said, 'This is my partner's younger brother. He just came out,'" one patron wrote about meeting one of the club's regular drag performers. "She said, 'Girl, you'll be fine.' And I was. And I am. Thanks for the world. Literally."

Has anyone who is an LGBTQIA+ person of faith said a similar thing in a church? Temple? Synagogue? Mosque?

When I first read this last line in the article I just smiled. Thisis what I want the people of our churches to be like: places filled with people in which LGBTQIA+ people can come out, and—instead of one of the regular drag performers—a clergyperson, lay leader, or member of a church saying, “You’ll be fine.”

With the demise and decline of such places as “epicenters” for LGBTQIA+ people in our cities, a younger generation of LGBTQIA+ people have made their way to dance parties hosted around the city of Portland in various dance and pop-up party venues, “from kikis to kink-centric parties, throwback soul nights and electro raves,” writes Gormley.

When congregations and pastors I work with are tired of asking the question, “How do we get more LGBTQIA+ people into our pews?” and getting no or few results from posting pride rainbow flags on their websites and church signs, I suggest to them that they try to be more like Jesus, who would go to the people, like the LGBTQIA+ people of today. Be like Jesus. Jesus did not sit in a synagogue, set office hours, waiting for people to drop in and talk with him. He had no home that we know of, just friends he hung out with, like Lazarus, Mary, and Martha. Jesus went out to where the people were, whether at a wedding feast, on the wet banks of the Sea of Galilee where people were fishing, among the workers working amidst the fields of grain during the harvesting season, or an upper room in Jerusalem for a meal.

And, yes, Jesus would go to a gay bar and hang out with queer people at a electro rave event.

This same approach still works today: go where us LGBTQIA+ people of faith hang out. Go to the morning hangouts in a post-COVID world like coffee and tea shops, bakeries, yoga studios like “queer yoga church” hosted by my friend Roger McKeever on Sunday mornings (pre-COVID 19), art galleries and studios, hiking groups, breweries, wineries, distilleries, along with rugby, softball, and dodge ball groups and leagues for LGBTQIA+ people. And what they all have in common? Being a space and people in the city where people could be themselves, and be told, time and again, “you’ll be fine.” And we are.

A toast to CC’s, and all the lives it saved. Literally and figuratively.

And may our congregations today be more like the LGBTQIA+ bars in a previous age!