“My Name is Pauli Murray” 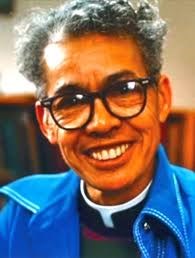 For over twenty-five years of my adult life, I lived in the Research Triangle area of North Carolina. My Ph.D. came from the University of North Carolina-Chapel Hill (UNC-CH), in special education with a focus in the humanities. My doctoral studies were split evenly between UNC-CH and Duke University in Durham, NC. I got to know the “Tobacco Mile,” as the road was called between the two campuses, well.  I lived in Durham, Chapel Hill, Carrboro, and Pittsboro, NC.

While I went to school and taught at Duke Divinity School in Durham, NC, I never heard the name of Pauli Murray. It wasn’t until I started to teach Ethics, World Religions, and English at North Carolina Central University—an historical Black college and university or HBCU—in Durham, NC, and attended the Episcopal church she attended in Durham, that I heard the name and came to know the incredible ground-breaking story of the civil rights leader, LGBTQIA+ icon, first Black Episcopal woman priest, the Rev. Pauli Murray.

Pauli Murray was a woman, a lawyer, Black, a lesbian, a poet, writer, an Episcopal priest, identifying as he/she or her/hers/she/non-gender binary, or no apparent sexuality. Let’s just say she broke numerous barriers in her life during the 20th century. She identified at different parts of her life as a man and as a woman. In Durham, in legal writings, the Episcopal church, in the LGBTQIA+ community, and in the nation at large, she has become an icon, a hero, a role model (for me), a revered saint among the saints of God.

And at the annual Sundance Film Festival in 2021, in the last few days there was the world premiere of the new documentary of Pauli Murray’s life story, “My Name is Pauli Murray.”

Pauli, or Pauline, Murray was born in Baltimore, Maryland on Nov. 20, 1910, and was the fourth of six children to Agnes Fitzgerald and William Murray. Orphaned at a young age, s/he grew up with her grandparents in Durham, NC.  She attended  Hunter College, graduating with a degree in English Literature in 1933, changing her name from “Anna Pauline” to “Pauli” soon after.

Before Rosa Parks, in the 1940s, s/he was arrested and imprisoned for refusing to sit at the back of a bus in Richmond, VA.

The first barrier she tried to knock down was entering graduate school at the all-white University of North Carolina. Denied admittance there, she went to law school at Howard University, where s/he coined the term “Jane Crow” to describe the experience Black women faced. While at Howard University s/he joined George House, James Farmer, and Bayard Rustin to form the non-violence-focused Congress of Racial Equality (CORE).

After graduation, she wrote the book States’ Laws on Race and Color, published in 1951 thanks to The United Methodist Women who commissioned this work as a service to the movement and part of their Charters for Racial Justice. Thurgood Marshall, then head of the NAACP legal department, described the book as the “Bible for civil rights litigators.

In 1956, Murray published Proud Shoes: The Story of an American Family, telling about growing up in a culture of white supremacy and anti-Blackness which oppressed her grandparents and their efforts of seeking equality in Durham, NC. Soon after, she met her partner, Irene Barlow, in Durham, NC.

In 1966, Pauli joined Betty Friedan and others to found the National Organization for Women (NOW) but left the group because she didn’t think they addressed the issues of Black and working-class women.

In 1973, after the death of her partner, Murray went to school at the Episcopal seminary, General Theological Seminary, in New York City. And in 1977, s/he became the first Black woman as an Episcopal priest in the US. Just one more barrier that needed to be broken down.

Pauli died of cancer in Pittsburgh, on July 1, 1985. Her autobiography,Song in a Weary Throat: An American Pilgrimage, was published posthumously in 1987.

In this month of February, Black history month, let us remember and celebrate this incredible Southern, Black, lesbian woman, civil rights trail-blazer, lawyer, caring partner, poet, and Episcopal priest. And she is considered a saint in the Episcopal church. St. Pauli Murray!

And may we follow in her footsteps, knocking down barriers that continue to slow down people, cultures, and countries from moving forward to being and becoming a place and people of welcoming, equality, and affirmation for and among all. And may we live truthfully and honestly all the days of our life. For as Jesus reminds us, “The truth will set us free” (John 8:31-32). Truly, the truth set Pauli Murray free to be the person God created her to be. 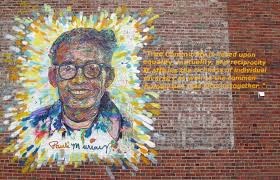