Performative Allyship and LGBTQI+ People in the Church 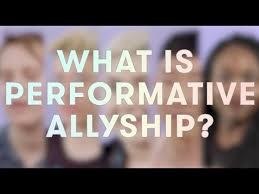 This is kind of one of the “terms” or “new words” for 2020: performative allyship.

Definition and description of performative allyship: First, allies are helpful. An ally is someone from a non-marginalized group who uses one’s privilege to advocate for a marginalized group. Being an ally is a good thing. In the LGBTQ+ community we welcome and appreciate our non-LGBTQ+ allies.

Second, performative allyship is problematic. It is when an individual or group of power/majority/privilege (e.g., white, male, abled, unqueer, etc) loudly profess(es) their actions in the name of 'allyship,' while actively conducting harm to, taking focus away from, and generally being unhelpful towards the group they claim to support, often to receive praise and attention, without taking critical action to dismantle the systems of harm.

We have all participated in performative allyship, though we may not be aware that we were probably doing it.

Performative allyship is often used among LGBTQI+ people, who experience overt or covert heterosexism in the church, workplace, or other places in the public square. Likewise, people of color point out overt or covert racism in the same places.

As Karen Yuan of Forbes on-line wrote: As organizations speak out against racial injustice, many have been accused of performative allyship--condemning racism through broad gestures but enabling its effects in their own workplaces.” Likewise, it would be speaking out against LGBTQI+ injustice through broad gestures, but enabling heterosexism’s effects in our workplace or communities of faith.

For example, in Pennsylvania, out gay Democratic politician and Pennsylvania State Representative Brian Sims says that many centrist Republicans in the legislature support minority rights when it's convenient and then drop them when it's no longer useful. Sims writes: “One of the toughest parts of fighting for LGBTQ+ civil rights in legislatures that have refused them for decades isn’t finding allies or support. They usually want to be found. The toughest part has always been distinguishing the obvious enemies, from the secret enemies. The overt from the covert. They, on the other hand, don’t want to be found.

The truth is that at no time are the rights of LGBTQ+ people, women, racial and ethnic minorities, or anyone else a joke, a campaign ploy, or a political stunt, and so often that is what they become.”

How does it look in the church?

Performative allyship is when people come up to me, to my face or in an email, and tell me how supportive they are of LGBTQI+ people in the church as members, as ordained clergy, marrying same sex couples, and when it comes time to support legislature in amending the Book of (choose your denomination), which is a denomination’s constitution, the rules of our bodies of faith, they vote contrary to a pro-LGBTQI+ set of amendments.

Performative allyship is telling me of one’s support of the LGBTQI+ movement in a denomination, then, when a church is hosting a conference or weekend workshop on inclusion and the voice and physical presence of LGBTQI+ people is absent, missing in action.

Performative allyship is flying a rainbow flag in the front of a church building and posting a rainbow insignia on the church’s website, maybe using the politically correct slogan and hashtag as well on communication in the church, but there’s no continual program or intention of reaching out to invite LGBTQ+ people in the community beyond the flag flying. There is no discussion or inclusion of stories of LGBTQ+ people in the sermons preached, education activities held, fellowship opportunities, regular youth group activities, or parents’ morning out programs.

Performative ally ship is a fruitful, open discussion of LGBTQ+ people in the church, and that the church would like to be more open and maybe become a Reconciling congregation, but there is the lingering fear that if the church members are too open and public with this sentiment, the church may get an out-LGBTQ+ pastor, and they don’t want to go that far.

I could go on. I’ve experienced all of these examples of performative allyship in my role and function as LGBTQ+ Advocacy Coordinator of the OR-ID United Methodist Church conference, as well as an out gay pastor in the Presbyterian Church (USA).

What we, who are LGBTQI+ people of faith need and want of the church is genuine allyship. We cannot make any progress legislatively, let alone ecclesiastically, as LGBTQI+ people of faith without bold and courageous allies among our colleagues in ministry and members of churches. We need and want allies who will not hide but rise up, even when it is unpopular, to do what God in Christ calls of all of us: to love God with our entire being, and to love our neighbor as ourselves. Allies in the faith, because of faith.