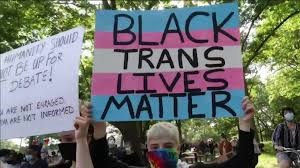 A few weeks ago, I posted about the story of Stonewall Inn and Marsha Johnson, a transgender woman of color who is seen as one of the lead figures in the Stonewall Inn riot that began the LGBTQ+ rights movement. Actually, there were two transgender women of color: Marsha Johnson and Sylvia Rivera, who, on June 28, 1969, fought back against police harassment, sparking a week of rioting.

And in the last few weeks, another name has come to be heard around the world: Tony McDade. On May 25, 2020, George Floyd was killed by police in Minneapolis. The following Wednesday, while Minneapolis was consumed by rioting, several candlelight mourners in Tallahassee, Florida, remembered Tony McDade, a Black transgender-masculine person, who was shot and killed by police that morning. Reporter Laura Thompson for Mother Jones newsletter wrote that: “The circumstances surrounding McDade’s death are still murky. Tallahassee police say McDade was a suspect in a fatal stabbing that occurred shortly before his death. Police say he was armed with a handgun and he ‘made a move consistent with using the firearm against the officer.’” The name of the white police officer has not been released yet.

Thompson continues: “Tony was a queer Black American who was gunned down by law enforcement,” says Gina Duncan, director of Transgender Equality for Equality Florida, a statewide LGBTQ advocacy organization. ‘Nothing can erase that. Talking about Tony’s earlier brushes with the law should not diminish the humanity of this being a person who is now dead and certainly shouldn’t diminish the fact that society failed Tony. Tony was calling out for help and society failed Tony in so many ways.’”

God, in your mercy…

But one doesn’t have to go to Florida to be reminded about Black LGBTQ2S+ Lives Matter movement. Right here in Portland we are reminded that Pride isn’t canceled, only the parades are canceled. This week’s issue of Willamette Week focuses on these voices (June 17, 2020).

My friend Cameron Whitten and Salome Chimuku, Co-Founders of the Black Resilience Fund, remind us that the experiences of Black LGBTQ2S (two spirit) people are only “centered when one of us is killed—and the public outcry always fades before any noticeable change is implemented.

Look no further than Titi Gulley, a houseless Black trans Portlander who was found hanging lifeless from a tree in Rocky Butte Park on Memorial Day (2019). If Black trans lives really did matter, Titi would be alive today, with safe and stable housing.”

Leila Haile, Co-Founder of Ori Gallery, wrote that “all of the anti-bias training on the planet will not get us free-it is up to each one of us to decide how we are going to become the grains of sand that brings the machine of white supremacy to a halt.”

Finally, Jayy Dodd, an artist, calls us to remember TLGBQ+ people: At the forefront of resisting the discrimination and systemic harassment of Queer people nationwide were Black Trans and Queer folks.  It was Black Trans women. It was Black Butch Lesbians. It was sex workers. It was not corporations and government officials and once-a-year campaigns.

Can Pride be a pro-Black, pro-Trans, pro-sex work, antifascist gathering and celebration? I don’t know, but again we are here, commemorating the labor of Black Queer Folk, despite the continued systemic theft and reassure of our lives.”

We, who are part of the body of Christ, know the power of remembering those who have died and joined the “Church triumphant,” in which we will say such things, like “Rest in peace, and rise in glory.” By remembering their names and stories, they keep on living in our hearts, minds, and bodies.

I end this blog with the naming of those names of those who have been killed this year alone. Feel free to quietly or loudly name these names, too. Light a candle. And may they all rest in peace and rise in glory.

Jayy Dodd finishes his essay with this comment: “If thing do not radically change, you will not know or see any Trans people of color in your lifetime. They are killing us. And ya’ll miss a parade?”