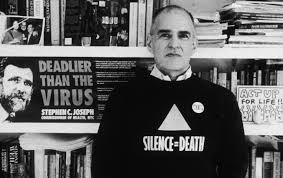 When I think of LGBTQ+ activists, and was considering the position of LGBTQ+ Advocacy Coordinator with the UMC folks in the OR-ID Conference, one of the first people who came to mind was the writer, playwright, and HIV/AIDS activist, the late-Larry Kramer. Larry Kramer died a few weeks ago, and his presence in this world is deeply missed by many of us.

Larry Kramer was a prophet in the Old Testament/Hebrew Bible sense. Consider the following description of a prophet from Presbyterian writer Frederick Buechner who wrote, and I paraphrase: “No one asks for the job of being a prophet. A prophet is a person, chosen by God, in which God puts a finger on that person, and their life is never the same." Buechner continues: a prophet means “spokesperson,” not “fortune-teller.” "The one whom in their unfathomable audacity the prophets claimed to speak for was God of the universe. There is no evidence to suggest that anyone ever asked a prophet home for supper more than once.” The prophets were drunk on God, and in the presence of their terrible tipsiness, no one was ever comfortable… Aprophet's quarrel with the world is deep down a lover's quarrel. If they didn't love the world, they probably wouldn't bother to tell it that it's going to hell. They'd just let it go. Their quarrel is God's quarrel…Karl Marx, Friedrich Nietzsche, Jonathan Swift, and Malcolm X were all prophets in their own way. So was Ayn Rand. So are Gloria Steinem and Rosa Parks.”

I looked in both the UMC Book of Discipline, and the PCUSA Book of Order, and neither denomination says much about clergy, lay leaders, or lay members being called to be a prophet.

I was once told by my friend Richard Rodriguez that the pay for being prophetic is lousy, but the call is priceless.

Consider these qualities and anecdotes of Kramer’s life: To quote NPR reporter Scott Simon, “angry, irascible, and indispensable.” He was harsh and strident. A Yale graduate, with a degree in English literature, Larry Kramer was a novelist and Hollywood screen writer (“Women in Love”), until the early 1980s when he saw friends all around him die of what was once called the “gay cancer,” or Acquired Immune Deficiency Syndromes, aka AIDS.

Larry Kramer was prophetic in his work in fighting for medication and treatment of people living with and dying from HIV/AIDS. He co-founded the Gay Men’s Health Clinic—GMHC—which was the largest provider of services to people with AIDS. He was furious with the slow response of the medical establishment and the government as AIDS deaths skyrocketed.

He let Dr. Anthony Fauci, already head of the National Institute of Allergy and Infectious Diseases at NIH, know that the medical community was complicit with the deaths of thousands of gay men from HIV/AIDS. Said Fauci, “I met Larry when he called me a murderer and an idiot in the newspaper. To him, I was the face of the federal government. He got my attention, and I listened… The federal official who had to weigh his words, and the activist who hurled words like fiery torches, became friends.” To this day, Fauci credits Kramer and ACT UP activists like Peter Staley, with speeding up the process in which government agencies test drugs. “There is no question in my mind that Larry helped change medicine in this country,” said Fauci, who heads up the task force against COVID 19.

In 1983 he published an essay, “1,112 and Counting,” raising the alarm about the disease called AIDS which was killing hundreds of gay men. He took gay men to task for what he saw as their shame and denial. “I am sick of closeted gays…every gay man who was unable to come forward now and fight to save his own life is truly helping to kill the rest of us… Unless we can generate, visibly, numbers, masses, we are all going to die.”

Larry Kramer was prophetic in his work for seeking equality for LGBTQ+ people and HIV/AIDS. His first book was “Faggots,” which was written years before AIDS destroyed his world. His play of 1985, “The Normal Heart,” was “praised for its polemics and moral courage at a times when AIDS was barely discussed in the mainstream,” wrote Neda Ulaby of NPR.

Larry Kramer was prophetic in changing the terms of power in the politics of this nation. Wanting to get the attention of the nation, he started the movement, ACT UP, which was a “direct action, educational and protest group,” which got the attention for its in-your-face guerrilla tactics, but back then the group was also committed to serious research,” wrote Ulaby.

His last book that he published as “The American People: Volume 1,” which came out in 2015, chronicling gay history in the US. Before he died, he was working on another book, connecting the dots between the emergence and response to COVID 19 pandemic in light of the HIV/AIDS epidemic.

And Larry Kramer did it his way to the very end of life. He died at the age of 84, and was HIV poz for over three decades, and died of pneumonia. In his dying days, Kramer alluded to another writer, W. H Auden, in a signature phrase: He insisted to friends and enemies alike—we must love one another or die.

He is survived by his husband, David Webster, whom he married in 2013.

A prophet has died, but not his legacy. His legacy lives on in those of us called to advocate for all LGBTQ+ people in a strange land called "church," which has often been hostile and less than, um, loving towards us.

We, who are out-LGBTQ+ clergy, lay leaders, and members, are here, and out, because of people like Larry Kramer. And if one is not out, you are most likely considering living life being out at any moment, because of Larry Kramer who dared us to change the world, not only for ourselves, but for those who follow in our footsteps.

As for activism of any kind: there are many voices that we may emulate as activists and advocates. In the end, one has to use one's own voice. But, holy kaboly, Larry Kramer was a model advocate and activist.

Much work still awaits us in the Church as LGBTQ+ people, especially in the UMC. But with the work of Larry Kramer to inspire us in one hand, and the Gospel in the other hand, forward we go, not one step back.