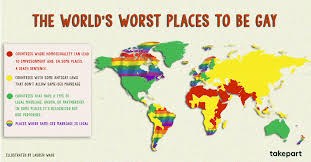 Resisting Evil: Violence Against LGBTQ+ People Around the World

In the United Methodist Church (UMC), the Baptismal Covenant begins with these words, “Resisting evil…”

While the UMC is in the midst of struggling with the way of moving forward, together, with some wanting the ordination of LGBTQ+ clergy and same-sex marriages in UMC buildings, while there are others in the church who do not want these things, nevertheless there is continued violence being perpetrated against LGBTQ+ people in this world, regardless of the COVID 19 pandemic. And violence against another person, simply because of who one loves, a.k.a., because of one’s sexual orientation or self-identifying as LGBTQ+, is evil. In other words, it is not of God.

While I’ve outlined evil in the acts of the current Department of Health and Human Services (DHHS), against LGBTQ+ people in terms of restricting health care to LGBTQ+ people, especially transgender people, today, I’m going to shift the focus globally. In other parts of the world, the very lives of people who are LGBTQ+, especially LGBTQ+ and HIV positive (poz), are being threatened with physical, emotional, and spiritual violence every day of the week. Why should we be concerned? Because violence, in any form, against any human being, is rooted in evil. After all, each person who is LGBTQ+ is a part of the human race, and many LGBTQ+ people were also raised in the Church, and are baptized, and are our siblings in Christ. They are part of the body of Christ, no matter where they are in the world. Remember: The Apostle Paul doesn’t put any geopolitical boundaries on who are members of the resurrected body of Christ (1 Corinthians; Ephesians; Colossians; Romans).

For example, recently, in northwest Kenya, there is the Kakuma refugee camp, in which 300 LGBTQ+ refugees from Uganda and other countries on the African continent, have fled to, in search of safety. In Uganda, simply being LGBTQ+ is reason enough to be put in jail. Reports from LGBTQ+ people in Kakuma said that the police in the area and the United Nations refugee agency, United Nations High Commission for Refugees (UNHCR), have failed to protect these people. LGBTQ+ people have been physically beaten and raped inside the camp, with little to no action to protect LGBTQ+ by UNHCR and the police.

In Poland, LGBTQ+ same sex unions or marriages are outlawed. The Law and Justice conservative political power are trying to not only suppress same sex unions and marriages in Poland. They are trying to ban simply being LGBTQ+, or trying to ban LGBTQ+ people from living in certain cities or towns in Poland. Married gay couple Dawid Mycek and Jakub Kwiecinski have been active in giving out 300 rainbow masks in which because of COVID-19. They know the risk of being out and being gay, because in Poland, being gay is equated to being part of the “homosexual plague,” a term used by the Catholic archbishop of Krakow, Marek Jedraszewski last August 2019.

And in the Middle East, like countries like Iran, or in Turkey, or in Saudi Arabia, and in many other countries in which the majority of people self-identify as being Muslim, simply being an LGBTQ+ person presents daily challenges to simply living. One’s life as an LGBTQ+ person is constantly being threatened by being thrown into jail for simply being LGBTQ+ or face more violent actions.

However, after re-reading this blog, I must end on a “high” note. We can celebrate that Costa Rica made same-sex marriage legal. This is the first Central American country to recognize same-sex marriage. In 2019, both Taiwan and Northern Ireland permitted same-sex marriage. And there are more countries that are getting ready to permit same-sex weddings.

While we, in the United Methodist Church, continue to be concerned with the issues of the ordination of out-LGBTQ+ clergy and same-sex weddings being recognized in the denomination, may we also be aware of what else is happening in the world in which we live, in which we are all called to "resist evil," not matter what form it may take, no matter one lives in the world, and no matter who is the victim of such evil, namely LGBTQ+ people.