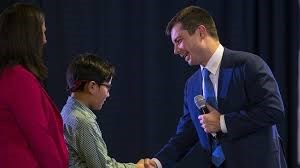 There is an adage in the world that I keep coming back to:  “90% of life is showing up. Sometimes it is easier to hide home in bed. I’ve done both.”

I thought of this quote as I read about Zachary Ro, a 9-year-old boy, who asked Democratic Presidential Candidate Pete Buttigieg, aka, Mayor Pete, to help him tell the world he’s gay, too: “I want to be brave like you.” Zachary was attending a rally for Mayor Pete in Denver, Colorado on Saturday night.

Mayor Pete responded, “’I don’t think you need a lot of advice from me on bravery. You seem pretty strong to me,’ Buttigieg, who is gay, told Zachary. ‘It took me a long time to figure out how to tell even my best friend that I was gay, let along to go out there and tell…a room full of 1,000 people.’”

Mayor Pete then told Zachary a few things that might be helpful in the future:

Mayor Pete continued, telling him to be “mindful of ‘who’s taking their lead from you, who’s watching you and deciding that they can be a little braver because you have been brave…I never could have seen that coming, and you’ll never know whose life you might be affecting right now, just by standing here. There’s a lot of power in that.”

While this is not an endorsement of Mayor Pete for the Democratic nominee for President, this is a blog on pointing out the importance of showing up, being present, living openly, honestly, and smartly as an LGBTQ+ person in the church today. In being a candidate for President, openly gay, husband, Episcopalian, Hoosier Mayor Pete shows up at rally after rally, debate after debate, town hall after town hall, and is present, showing up at these events, showing the world that an openly gay man can run for President. And that’s exactly what young Zachary Ro was needing to see, hear, feel, and imitate as he showed up on the same stage, was present, showing up, as a 9-year-old boy who self identifies as gay. I was 9-years-old when I knew I was gay, too.

The same model and impact holds true for being an open LGBTQ+ person and assuming a leadership role in a church or other community of faith. When I enter the  sacred space of the pulpit or preaching space of a church—United Methodist, Episcopalian, Presbyterian or UCC—I know that there are many in the congregation who may never have seen an openly gay pastor preach before in a church's pulpit. I know that is true because I have often heard it said by many people when greeting them after I preach. I was one who hid in my closet, or in my bed as a young gay man. It wasn't until I was in seminary and graduate school that I watched, heard, and was moved by speakers like Richard Rodriguez, Dan Savage, and Janie Spahr and knew that I, too, could stand up, be present, and show up and preach and teach as an openly gay man and pastor. It took several tries and practice, but, with time, I got better in saying, "I'm Brett Webb-Mitchell, and I am a Presbyterian pastor, pilgrim, dad, and an openly gay man, and in a partnered relationship." Every time I do this, no matter how large or small the audience, I still get chills down my spine.

The power of such modeling has helped the church move forward in other arenas as well.  For example, I know a lot of friends who are women clergy did not contemplate being a pastor until they saw their first woman pastor preaching from the pulpit of a church and knew that the call of God of church leadership was true for them. Likewise, I know there are young people in a congregation who may or may not be an out LGBTQ+ person who consider church leadership after seeing and hearing an openly LGBTQ+ person preach from the pulpit. Then the Holy Spirit continues to do the work of instilling in a young person the call that one might also be interested and called to ministry in the life of a community of faith.

May it be so for all of us, and the generation following in our footsteps as we follow Jesus, the Pilgrim God.