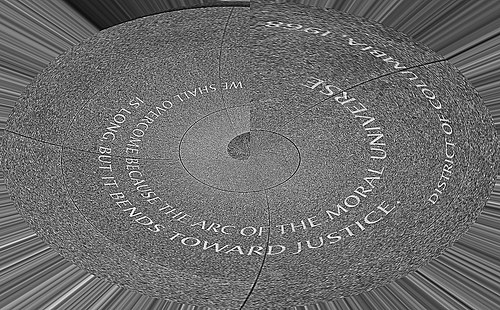 Martin Luther King, Jr., once stated that, “the arc of the moral universe is long, but it bends toward justice.”

I was reminded of this quote as I read the current news regarding churches, denominations, and LGBTQ+ people. After the US Supreme Court ruled in the Obergefell v. Hodges landmark civil rights case, that we who are LGBTQ+ have the right to marry, guaranteed by both the Due Process Clause and the Equal Protection Clause of the Fourteenth Amendment of the US Constitution, many LGBTQ+ writers and pundits predicted that there would be a backlash against LGBTQ+ people, especially in terms of our right to marry throughout the US.  While the Obergefell v. Hodges decision was a significant bend in the arc of the moral universe toward justice, there have been numerous attempts to be sure the bend doesn’t dip too fast or too far. For example, in many states like North Carolina, civil magistrates have been given the right to refuse issuing LGBTQ+ couples marriage certificates, based on religious beliefs. And we know of some bakers and florists are raising “religious conscience” arguments, saying that their businesses shouldn’t have to bake cakes or arrange flowers for LGBTQ+ weddings because it offends their religious sensitivities.

Likewise, I am reminded of the injustice against LGBTQ+ people within the Church in the last few weeks, which always feels like a punch in my gut and reminds me of the second-class citizenry of LGBTQ+ people in major denominational politics, even today in this modern world. Of course, our second-class citizenry was reinforced with the decision of the United Methodist Church specially called General Conference, 2019, which reaffirmed the hurtful language and policies of the UMC toward LGBTQ+ people. And in the last few weeks, in the Swedish-born Evangelical Covenant Church denomination (ECC), First Covenant Church of Minneapolis, Minnesota, was voted out of the denomination at the ECC annual meeting, as was its minister (June 27, 2019). It wasn’t because their pastor, the Rev. Dan Collison, was LGBTQ+, or that anyone had performed a same-sex wedding in that church, but because First Covenant church said “it would treat LGBTQ members as equals, allow married gay clergy and would be open to hosting same-sex marriages…Three-quarters of the more than 1,000 delegates to the meeting voted to remove the church from the denomination, which includes 875 U.S. churches with about 300,000 members.”

Likewise, the Anglican Church of Canada failed to approve a motion to allow for same-sex weddings in their churches last week. The motion was to remove references that the sacrament of marriage was strictly between a man and a woman, which would have allowed for same-sex weddings. The rules of the Anglican Church of Canada said that the motion had to be passed by two-thirds majority from three groups: the laity, the clergy, and the bishops. The vote failed among the bishops (July 13, 2019).

Again: a punch in the gut, twice in a few weeks’ time. Second class citizenry reinforced.

The United Methodist Church, the Evangelical Covenant Church, and the Anglican Church of Canada have all been part of the backlash when it comes to something as simple yet challenging as ordination of LGBTQ+ clergy or lay leaders, and same-sex weddings.  The majority fear that their churches will simply fall apart and lose members (they are already losing members). The legislative leadership and members of these denominations are part of the backlash against those of us who are LGBTQ+ as others welcome us, affirm us, want us, and are slowly bending the moral arc of the universe.

What we, who are Christian and LGBTQ+ and allies, are experiencing is an injustice at the hands of the state and the Church currently, especially in light of the policies against transgender people by the federal government. What we need to do is figure out creative and innovative ways of keeping the bend going, or in other words, keep moving towards justice. Consider the words of Dietrich Bonhoeffer, who wrote: “we are not to simply bandage the wounds of victims beneath the wheels of injustice; we are to drive a spoke into the wheel itself.” Through continued creative legislation, like voting for progressive slates of candidates to be elected to the 2020 General Conference, and through acts of civil disobedience, and, when necessary, through denominational disobedience, let us pursue the cause of justice, equality, and equity for one and all, LGBTQ+ people and allies alike. Or, as I learned in the civil rights marches of Moral Mondays in North Carolina, let us work together, LGBTQ+ people and allies alike, remembering the call: forward together, not one step back.