Greater NW Pride: The Ten Year Anniversary of the Repeal of DADT

Greater NW Pride: The Ten Year Anniversary of the Repeal of DADT 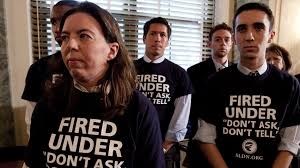 The Ten Year Anniversary of the Repeal of DADT

On December 22, 2020, we as a nation, especially in the LGBTQIA+ community of US citizens, will have something to celebrate. We will celebrate the 10 year anniversary of the repeal of the dreaded, awful, Rube Goldberg-inspired, compromised and compromising DADT policy in the US armed services.

What is DADT? For those not familiar with this abbreviation it stood for “Don’t Ask, Don’t Tell.” It is an historic practice that was evil.

A bit of history: The term, “Don’t Ask, Don’t Tell,” or DADT, was signed into law by then-President Clinton in 1993, directing military personnel that LGBTQIA+ military service people were not to be outed and then dismissed, unceremoniously or “dishonorably.” LGBTQIA+ were told that they were not to tell anyone that they were openly or out LGBTQIA+. In other words, there was to be an agreement, between the military service and LGBTQIA+ people, of “don’t ask, don’t tell, don’t pursue, and don’t harass.” This was a compromise of sorts, in which up to the signing of this bill, LGBTQIA+ military personnel could be outed, pursued, and harassed, brought up on charges, and dishonorably discharged. Out LGBTQIA+ personnel were banned from service and serving openly since World War II. This new law, DADT, went into place on October 1, 1993, though, in effect the ban of LGBTQIA+ people remained in effect, but with the new language around it.

Needless to say, up to 1993, thousands of LGBTQIA+ people in a military service were dishonorably discharged. Others who wanted to serve their country learned the survival tools of subversion and were smart, never answering questions about one’s “orientation” honestly with anyone, obfuscating when need be, tattling on others to take attention from one’s self, acting ignorant if necessary, lying openly, and, if married to someone of the opposite sex and hiding, constantly praying and hoping that one’s opposite sex spouse would play along with the charade, for the sake of the family and one’s career. Some in their LGBTQIA+ closet worked quietly with other closeted military personnel, and said nothing at work, going to bars and other well known yet underground venues. Living quiet, closeted, subversive lives was an art form and the rule of the day that had to be constantly practiced, while at the same time trying to serve their nation honorably. Staying under the radar was everything.

Imagine, if you will or can, staying in the closet or hidden with a large part of your life, while taking oaths and making promises, for the good of the nation, that you will be honest, truthful, courageous and valiant, fighting for constitutional freedoms for everyone else, but not for yourself. It meant living two different lives and praying to God the two would never cross.

After the House of Representatives and the US Senate voted to repeal the DADT policy, carrying out a campaign promise, then-President Obama signed the legislation, making the repeal of DADT law on December 22, 2010. The policy officially ended on September 20, 2011.

History was made. Some lives were spared. Others died before they could live openly in this good news.

That is why it has been especially ominous lately when the current President has used executive orders to try to curtail the service of out-transgender military personnel in the last few years.  This administration has not only wanted to bring back DADT, but obviously to take us back to pre-DADT days.

Why is this significant for a church-based blog, to report on this anniversary? Because many of us who are LGBTQIA+ in the service of the Church, the body of Christ, also practiced our own version of DADT. We learned well from our closeted peers in the military service as we served Christ and the people of God. In some of our circles, we even called it DADT in the Church. Much like our military friends, we too learned to be in the closet, play the game of hide and go seek, worked with our judicial and executive branches of the Church under our own rudimentary “don’t ask, don’t tell, don’t pursue, and don’t harass.” We lied, hid, answered questions with confusing questions to various boards responsible for our ordinations, hid our significant others, never dated openly, stayed married to our opposite sex spouses for the good of our pensions and benefit plans, let alone our jobs. Even when some LGBTQIA+ were dying of HIV/AIDS related symptoms in the late 1980s and 90s, those who were HIV positive hid the reason that they were sick or dying, in order that one’s spouse would be able to receive the benefits upon one’s death, even though many congregations knew.

As I’ve told in this blog before, when my Presbyter Executive—who supervises and coordinates the ministries within a geographical region of the Presbyterian Church (USA)—found out that I was gay, she told me to basically live a life of DADT. Her comment to me: I will save your ordination from those who want to take it away because you are gay, but I can promise you that you will never work in the church again as a pastor because you are gay. It would be best for you to live a life of DADT. Can you do that? She told me never to hold my partner’s hand in public, let alone kiss him in public. Never be seen entering a store together, restaurant, or our home together. And when home, keep all the shades and drapes drawn.

Sadly, today, even with the Western Jurisdiction of The United Methodist Church's Safe Harbor program, there are many LGBTQIA+ clergy, lay leaders, and lay members in the UMC, and in other Christian denominations around the world, who continue to live a DADT daily existence this Christmas. And these folk are tired, confused, exhausted, yet are survivors, and will do whatever they can do to serve their neighbor and their God. That won’t change until, like the US military, there is a repeal of the laws in the Book of Discipline.

DADT continues to live in the Church today.

As we celebrate the 10 year anniversary of the repeal of DADT as a nation with our military personnel, let us light a candle this Christmas and pray for the future of the Church, working towards the day in which an ecclesiastical version of DADT is finally tossed to the dustbin of history, where it belongs.