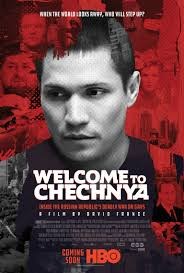 “Welcome to Chechnya”: A Film Review

Like many who read this blog, I’ve become quite the film and tv critic during the COVID 19 pandemic, especially of LGBTQI+ films, series, tv shows. I’ve watched the last episodes of the re-boot of Will and Grace on Hulu/NBC; I watched episodes of Euphoria on HBO and was stunned by the power of this series, featuring the new young transgender actor Hunter McShafer. I got caught up on Schitt’s Creek on Netflix, and laughed and cried at the wedding (spoiler alert) of David and Patrick (a review to come soon on this series). And I thought Ryan Murphy’s Pose on FX and Hollywood  on Netflix, and season two of The Politician (Netflix) were all incredible in their own storytelling way. Thumbs up to the documentary of two wonderful lesbian baseball players, A Secret Love. And I've seen other great films, series, and television series (Love Kim's Convenience.).

I have also chosen to have my own “mini” David France film festival. David France is a documentarian in terms of the kinds of films he creates. He produced How to Survive a Plague, which covers the earlier times of the HIV/AIDS crisis, which is pertinent in understanding how the government and the pharmaceutical industry work in the middle of a pandemic like COVID 19. And the other film that I will cover later is The Death and Life of Marsha P. Johnson, the person who almost single handedly started the Stonewall riots, and the beginning of the LGBTQI+ equality movement.The most recent film is Welcome to Chechnya on HBO, 2020.

I want to begin this mini-film festival focusing on the documentary Welcome to Chechnya. Monica Castillo of "Rogerebert.com," writes that the film is about the ongoing abusive treatment of LGBTQI+ people in the Russian state of Chechnya. A synopsis: in 2017, news of LGBTQI+ people being arrested, tortured, and killed by strangers or relatives because of their sexual orientation in Chechnya. This is permitted under Putin-approved leader Ramzan Kadryov, who, to this day, declares there are no LGBTQI+ people who live in all of Chechnya. The film is narrated by two people, David and Olga, who are interviewed separately, who work with the Russian LGBT Network. The Russian LGBT Network own a “safe house” of sorts in Moscow, in which they try to get people through a so-called “Rainbow Railroad,” taking people out of Chechnya to a country that is welcoming of LGBTQI+ people, like France or Canada. One courageous young man, Maxim, decides to fight back. A native-born Russian, he was working in Chechnya when he was arrested and tortured. By good fortune, he got out of Chechnya, and made it to this half-way home, where he met up with his boyfriend, and later family, all who were threatened to be killed by Chechnyan authorities free to work in Russia. One of the most powerful moments in the film is when Maxim comes “out” of the shadows and faces the press, telling his story, while filing a charge, in Russia, against the Chechnyan government for abuse. Another excruciating story is where a young woman has to wait six months in an apartment in the middle of Russia, not even able to go outside to take out the trash. She suddenly disappears because the isolation got to her. Finally, there is the story of Olga, who, herself, has to leave the country after she tips off the Russian government that she is trying to help a young Chechnyan lesbian leave the country and her family.

In working within a denomination, the United Methodist Church, that is still not overall welcoming of LGBTQI+ people worldwide, and coming from and ordained by the Presbyterian Church (USA) a denomination that was also abusive towards LGBTQI+ clergy and laity, this film struck a nerve as I realized that the experience of the LGBTQI+ Chechnyans was similar to what many of us have gone through as LGBTQI+ people in the church:

The film ended on a mixed note: in the first two years of the purge in Chechnya (2017-2019), the Russian LGBT Network resettled 151 people abroad. Canada granted refugee status to 44 of them with the help of the Toronto-based Rainbow Railroad. The Trump Administration has not accepted any LGBTQI+ refugees from Chechnya. The filmmaker did hold out hope that this isn't the end of the story.

And that is my sure hope for the UMC. My hope is that we have places and programs where our church is more and more like the Russian LGBT Network, including with our Safe Harbor program and Reconciling Ministry Network, for LGBTQI+ people of faith throughout the church. That is my hope. That is my goal as the LGBTQI+ Advocacy Coordinator. That’s because as a Christian, I always have hope, because I know that love will win in the end.

Until then, join me in the struggle to advance the good cause of assisting churches and other communities of faith to be less like Chechnya and Russia, and more like the realm of God’s love, affirming, welcoming and reconciling with one another, as equal members of the risen body of Christ.

**
On another note, would you please spread the news about this blog? We currently have over 500 people who subscribe to this blog. I would like to aim towards 1,000 subscribers, to get the word out about what we are doing in the OR-ID UMC Conference in advocating for the place and presence of LGBTQI+ people in the UMC. You don’t have to be a member of the UMC or this Conference simply follow this easy process: “Become a subscriber to the Greater NW Pride blog to get Greater NW Pride in your email box!” Thanks! Let’s hit that 1,000 mark in the next few weeks! Spread the news about LGBTQI+ people in this conference today!