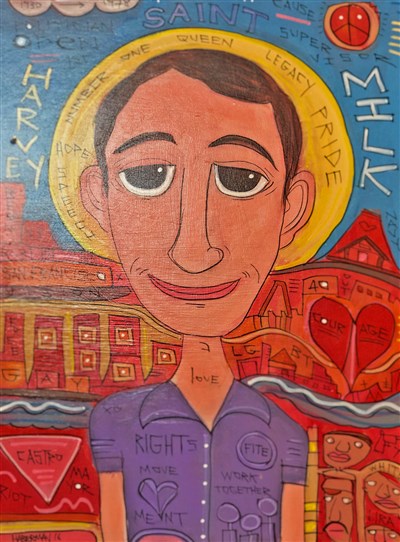 What St. Harvey Milk Has to Say to Queer UMC Folk

Above my desk in my office space in the OR-ID United Methodist Church Conference Center is a modern-day icon of St. Harvey Milk, one of my heroes in the LGBTQ movement, painted by the local artist Chris Haberman. In this moment of change within the United Methodist Church, I’ve asked myself, “What would Harvey do?” After all, he was in the nexus of change in modern American society, and his story, like many other stories of LGBTQ people in and out of faith communities brought many mainline Protestant churches, including the UMC, to this point of having to decide about the future, with those of us queer folk as part of their future.

For those who have not seen the documentary on Harvey Milk, “The Times of Harvey Milk,” or the movie, “Milk,” Harvey grew up in New York, quiet about being gay, getting a college degree in math and serving in the Navy during the Korean War. Through the 60s, he lived openly in a same sex relationship, though he kept being gay hidden from his family. With a new life partner, he moved to San Francisco, opening a camera shop in the city’s Castor District. He ran for a position on the San Francisco Board of Supervisors three times, finally winning in 1977, and becoming the first openly gay person elected to any office in the US. Milk tragically died on Nov. 27, 1978, when Dan White, a former member of the Board of Supervisors, who clashed with Milk on LGBTQ rights, killed Milk. That evening, thousands showed up, walking from the Castro to City Hall, for a candle light vigil in honor of Harvey Milk.

At a 1978 rally, commemorating the anniversary of the Stonewall Riots, he urged LGBTQ people to “come out”: “I ask my gay brothers and sisters to make a commitment to fight. For themselves, for their freedom, for their country…We will not win our rights by staying quietly in our closets…We are coming out to fight the lies, the myths, the distortions.  We are coming out to tell the truth about gays, for I am tired of the conspiracy of silence, so I am going to talk about it. You must come out.  Come out to your parents, your relatives…”

And come out to your churches.

Harvey Milk is not alone in this approach. Sex columnist Dan Savage and conservative political writer Andrew Sullivan, both gay, have pushed for the same approach: LGBTQ people have to come out of our closets and tell our stories. To show how effective this strategy is in turning around public opinion, consider how quickly marriage equality came to be the law of the land not only in the US, but in the Republic of Ireland and other parts of the modern world. It wasn’t because of the goodness of cisgender straight people, but because LGBTQ people started to come out of our respective closets and talked to family and friend, business acquaintances and other people in the public square. After all, in coming out of our respective closets as LGBTQ+ people, we are living truthfully, honestly. And as Jesus said, the truth shall set you free (John 8:32).

Like other denominations, there has been a conspiracy of silence in the United Methodist Church, internationally. My former partner, who was going to be an ordained clergyperson in the UMC, was told by his Board of Ordained ministry who knew he was gay that in order to be an Elder in the UMC he should keep quiet about being gay and “lie for Jesus.” He couldn’t buy this line, so he left the ministry. Others, though, are in the closet and lying about who they are, thus lying to Jesus, because they are scared and live in fear of losing their families, place in a church, and place in society. This fear then drives many closeted LGBTQ people deeper into their respective closets. There is an innate fear of being hated and excluded from those in the church, as well as home, communities, work place, and in the public square. Now is the time to stop lying to Jesus, to break through and tear asunder this conspiracy of silence that has enveloped the UMC. In the week following up to and since 2019 General Conference, more LGBTQ UMC clergy, those who are interested in being ordained, lay leaders, and laity have started to come out, not only in the US, but probably in other parts of the international United Methodist Church. This is the time for closeted LGBTQ clergy and lay leaders to come out and be known in Alabama and Illinois, in the Philippines, in the Democratic Republic of Congo, in Germany, and in Norway. The Queer Clergy Caucus of the UMC is ready and willing and able to help out LGBTQ clergy to get the resources necessary, as are the folks in Reconciling Network, as they work through their respective conference in being identified as an out LGBTQ clergy person. Judicial processes will hopefully be flooded with all the work that has to be done when more and more UMC clergy come out of their closets. We who are LGBTQ UMC need to let our straight cisgender sisters and brothers know we are here, and we are queer, and how queer the UMC already is.  But this will not be the case unless we, in all denominations, but especially the UMC, take up the challenge of Harvey Milk, “to fight the lies, the myths, the distortions” that kill the very souls of LGBTQ people: “You must come out!”