Greater NW Pride: What the Church Can Learn about Welcoming LGBTQIA+ People from “Schitt’s Creek”

Greater NW Pride: What the Church Can Learn about Welcoming LGBTQIA+ People from “Schitt’s Creek” 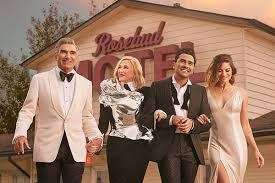 When I am in a period of doing some concentrated work and need a diversion and blow off steam, I often turn to TV comedies to get me through a certain span of concentrated times. During seminary, it was the televised version of “M*A*S*H”. In coming out of the closet and working in an insanely intense homophobic environment, it was “Will and Grace.” Transition from North Carolina to Oregon? "Modern Family."

Through the COVID 19 period, it is the re-runs of “Schitt’s Creek,” currently running all six seasons on Netflix.

For those who are unfamiliar with this series, a synopsis of “Schitt’s Creek”: When filthy-rich video store magnate Johnny Rose and his family (wife, Moira; son, David, and daughter, Alexis), suddenly find themselves broke, they are forced to leave their pampered lives to regroup and rebuild their empire from within the rural city limits of their only remaining asset - Schitt's Creek, an armpit of a town they once bought as a joke (for David’s birthday).

“Johnny Rose” and “Moira Rose” are played by Eugene Levy and Catherine O’Hara, well-known character actors who were also a married couple in Christopher Guest’s movie, “Best in Show,” a spoof of the Westminster Kennel Club dog show. “David,” their pansexual/gay son, is played by Daniel Levy, Eugene Levy’s son. And “Alexis,” is played by “Annie Murphy.”

Erin McCarthy wrote that the core of the series is this: “Schitt’s Creek is a show about family. ‘We’ve used a fish out of water scenario to help dramatize that story,’ co-creator and star Daniel Levy told Assignment X, ‘forcing them into a motel room and ... examining what it means to be a family and what relationships are and having the time to concentrate and focus on who they are to each other and what they mean to each other.”

While there is no physical church, mosque, synagogue, or temple in “Schitt’s Creek,” people claim a faith background from time to time. In one episode, “David” himself claims to be half Jewish and half Christian. And there was the time that “David” ran away from the motel where they lived, finding himself living with a conservative Mennonite family, who were only too ready for him to move on when his family came looking for him. Then there was “Moira” dressed as a bishop of a church at a wedding.

What they do have, in its place, is a strong sense of civic pride and civic engagement, with a town council that acts more like a parish board or church’s Session. For the most part, the people who live in “Schitt’s Creek” are uncommonly decent, and that makes it all the more admirable and appealing.

In reflecting upon what I find powerful and moving about this series, and the reason I keep re-watching it, is that I find that there are lessons that we, in the Church, can learn or re-learn about living together, especially in welcoming, affirming, and accepting those who of us who are LGBTQIA2S+ people in the Church today, outside even the obvious lessons to be found between “David” and “Patrick,” the gay couple of this series.

First, heterogeneity and differences are to be celebrated and welcomed in “Schitt’s Creek”: The town of “Schitt’s Creek” itself is filled with colorful characters, of course. There are those who are pansexual and bisexual, as well as others who are lesbian and gay. There are a mixture of races from those who are black and white, as well as people with a South Asian background. Young, middle aged, and old live there, with a baby now and then making an appearance (“Roland” and “Jocelyn’s” surprise baby boy). Rich, middle class, and poor. Married, single, and divorced. Those who are able-bodied and people with disabilities. And in this rich mixture of people, they all seem to work things out, talking directly to one another often, even adapting to the eccentricities of the once-wealthy “Rose” family. Sometimes, we in the church only welcome and seek out those who look like us, smell like us, dress like us, and eat like us. Paul said that is no way of being Christ’s body with one another if everyone looks, sounds, feels, and acts like a “foot.”

Second, and next, immersion and relational approach to life works sometimes in dealing with our differences. My favorite place to watch how the differences are worked out in this town is during the town council meetings of “Schitt’s Creek.” The council meets regularly and discusses the “hot topics” of the town. There is “Roland Schitt” as mayor, along with “Ronnie,” who is a black woman, who does tile work in homes around the town, old “Bob,” of “Bob’s Garage,” and “Moira Rose,” a once-celebrated television soap opera diva, and wife of “Johnny,” along with a mixture of people in the town itself who come for town council meetings. They all live with one another, day in and day out, in a kind of “immersion” approach to dealing with the different issues that different people have among one another, in which they all grow closer together in time. We remember that God immersed one’s self in creation’s story in the person of Jesus Christ, and saw, firsthand, some of the “issues” we deal with daily.

Third, the gift of time. The “Rose” family lost everything when the “Johnny Rose’s” video empire came to a quick end. In the first two or three seasons, the “Rose” family kept looking for ways of moving out of and away from this rural “backwater” of a place in the middle of nowhere. But in one episode, with the celebration of the “Roses” wedding anniversary at a “fancy” restaurant in nearby “Elmdale,” the Roses are having dinner with a couple they had lost contact with from their previous life, and “Roland” and “Jocelyn” “Schitt” of “Schitt’s Creek.” While the visiting couple put down “Schitt’s Creek,” in a surprising move, “Johnny” came to the defense of the little town that he had grown to love, with townspeople who loved them in return. Like families, sometimes we need to let church’s grow more welcoming with time.

Fourth was the gift of grace throughout six seasons of “Schitt’s Creek”. From the ebb and flow of “Alexis” and “Ted’s” (the town’s veterinarian) relationship, of being engaged and falling out of love, to letting each other go out of love for one another, to the (spoiler alert) dating and (finally) wedding of “David” and his love, “Patrick,” and for the love that re-blossomed between “Johnny” and “Moira” throughout the six seasons, there was a kind of grace that smoothed all the frictions and helped each character to grow into better people than they were at the beginning of the television series. God knows that grace through faith is what makes life in a community of faith possible.

Enjoy this small little series, of a small little town and a dysfunctional family with a big heart, and let us learn from these very human souls how we can be body of Christ with one another.