Greater PNW Pride: What CNN's Anderson Cooper Might Teach Us About Being Church

Greater PNW Pride: What CNN's Anderson Cooper Might Teach Us About Being Church 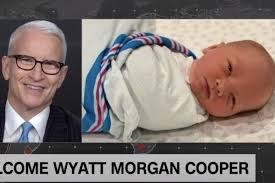 There is no other comparable experience like becoming a parent. It is simply overwhelming. Being present at the birth of my children, holding their mom’s hand, breathing with her through her contractions, being in the birthing room, cutting the umbilical cord of both children, and then holding them in my arms as their mom was taken away to be cleaned up, is seared into my memory. While their mom had nine months to prepare for the moment of a child in our lives, for the dad, it comes all at once, with an uncontrollable rush of strong, fleeting moments and emotions, a crowd of people bringing forth the child from their mom's body, and then the quiet after the flood of thoughts and feelings, and the surging movement of love and connection when each child in my arms. First moves: I remember singing to the infant in my arm, saying a prayer of thankfulness and "what now?" while touching their hands, their feet, their face, simply giggling, and smiling, with a tear in an eye, all over what had just happened: a new life was now in this world. God’s message of hope for the future was in my arms. Someone who had never been here before just made their presence known with both a cry (while my daughter cried briefly, my son looked like he had been interrupted from his still slumber and was not happy) and then silence as they both fell asleep in my arms.

CNN’s Anderson Cooper became a dad a few weeks ago! And, like me, because he is gay, he is a gay dad, too.  Welcome to the tribe, Anderson! As he said on CNN: “I am a dad. I have a son.” His name is Wyatt Morgan Cooper. Cooper said, “As a gay kid, I never thought it would be possible to have a child, and I’m grateful for all those who have paved the way, and for the doctors and nurses and everyone involved in my son’s birth… Most of all, I am grateful to a remarkable surrogate who carried Wyatt, and watched over him lovingly, and tenderly, and gave birth to him. It is an extraordinary blessing—what she, and all surrogates give to families who can’t have children… My family is blessed to have this family in our lives.”

Of course, because Anderson Cooper is a public personality, his story is free for any person in the world to comment about.  And Michael Brown of Christian-based Charisma News, felt the need to squash Anderson Cooper’s joy: “When I saw the announcement of his birth, I felt sadness more than happiness.  Sadness for him and for you… Anderson, a boy deserves his mother, yet if I understand your plan correctly, your son will not be raised together by her and by you. That’s what saddens me the most. Can you imagine what your life would look like today without the influence of your mother? Can you imagine Anderson Cooper without Gloria Vanderbilt? Who would you be without your mom?” Anderson Cooper’s father died when Anderson was 10 year’s old, but Michael Brown doesn’t care about men raising children. And he didn’t chastise Gloria for not remarrying and providing young Anderson a dad-figure.

Then the conservative, religious right mandate comes out, since marriage is between “one man and one woman.”  “That’s because biology is very stubborn, and the way God created us, every human being has a mother and a father and is meant to be nurtured by both. Two men, no matter how much they love each other, cannot produce a child. It’s the same with two women… But this is not simply a matter of biology.  It’s a matter of complementarity. The mother and the father each bring something unique and special more unique than the difference between two dads or two moms. That’s because male plus male or female plus female can never equal male plus female.

Sadly, what Mr. Brown doesn’t appreciate is that, first, it takes a village to raise any child (to quote an African proverb, in which it also takes a child to raise any village). Second, and all kidding aside, what Mr. Brown doesn’t appreciate is the place and presence of a church in a child’s or family’s life, and the sacred meaningfulness and “call to action” of our baptism. For it is in our baptism, not in the individual family unit, that the network of incredible relationships—both holy and mundane—are celebrated, affirmed, and called to action in supporting everyone in raising a child and whatever family or guardians come with a child. In our baptism, we are publicly welcomed into the body of Christ, which is an incredible household of people, to say the least.

In the United Methodist Church, in the Baptismal Covenant, these words may be said by the congregation at the conclusion of the child’s baptism: “Now, it is our joy to welcome our new sisters and brothers in Christ,” says the pastor. And the congregations responds: “Through baptism you are incorporated by the Holy Spirit into God’s new creation and made to share in Christ’s royal priesthood. We are all one in Christ Jesus. With joy and thanksgiving we welcome you as members of the family of Christ” (my emphasis).

“With joy and thanksgiving we welcome you as members of the family of Christ.”

Each and every infant, child, young person, and adult who has been baptized into the faith instantly becomes part of a large household of faith, with plenty of moms, dads, significant guardians, which, in some cases, may be even have a stronger influence than our biological or adopted parents.

For the time being, Anderson Cooper has chosen to raise young Wyatt with his former boyfriend, Benjamin Maisani. “I don’t really have a family, and so my friends become my family (my emphasis),” said Anderson.  He continued: “When I was a little kid it was just my mom and my brother.  She was not the most parental person and I wish some adult after my dad died had stepped in and just been like, ‘You know what, I’ll take you to a ball game,’ Or, ‘Let’s go out to lunch every now and then and let’s just talk.’ You know, like, no one ever did that and so I thought, well if something happens to me or even if something doesn’t happen to me, if more people love my son and are in his life, I’m all for that.  My ex is a great guy and I think it’s good to have two parents, if you can,” said Anderson.

“My friends become my family” is a refrain I hear often in the LGBTQ+ community, as many of my friends, including me, have chosen close friends to be my “family,” along with my fiancé. We are now “Pops and Opa” to my granddaughter. Sadly, and wrongly, many LGBTQ+ people were rejected and disowned by their biological and adoptive families. The faith communities in which my LGBTQ+ friends were involved with rejected them as well. And there is a long history of churches refusing many LGBTQ+ parents the opportunity to baptize their child. In response, many LGBTQ+ parents simply choose friends to be family in raising their children. It will take generations for many LGBTQ+ people to trust the Church again.

With a grateful heart, in raising my children, I can say they were surrounded in love by their mom, dad, and my former partner. Baptized as infants and nurtured in the Christian faith in local communities of Christian faith (I’ve pastored 10 churches, so lots of communities), they were also loved, adored, and even lovingly disciplined, by many loving church communities. And there were a lot of moms, dads, and grandparents in these churches who loved my children unconditionally, and still do, even to this day.

So, Dear Anderson: I hope that someday, along with Wyatt and Benjamin, you will all find a faith community that will also provide a network of relationships of love and support, as part of the body of Christ.

And Anderson: welcome to the tribe of gay parents. Enjoy each and every day this gift in your life, Wyatt Morgan Cooper.

Just let me know if and when you are looking for a church in raising Wyatt and supporting you and Benjamin as parents.