My goal was to keep my mouth closed and my ears wide open, something that miraculously I was able to do for a good part of the trip (though I had to put in my two cents to berate the use of the “f” word in Mackelmore’s catchy “Thrift Shop” song…I do have some standards).

What was interesting about that trip was their collective love for their electronic devices – and in particular the cameras that are so conveniently (and magically) attached to their iTouches, iPhones, or iPads.  Their cameras were constantly in use – and not to take photos of beautiful Multnomah Falls, or the flowering trees of Hood River, or even the windsurfers just before th 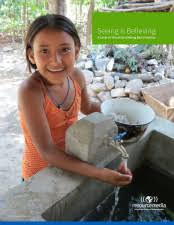 e Dalles – they were taking pictures of each other having fun in the car.

These girls intuitively know that photographs tell a better story than words alone.  In a fabulous new report by Resource Media on the science of visual communications, “Seeing is Believing: A Guide to Visual Storytelling Best Practices,” scientists have shown that:

1.    Humans are visual first, verbal second.  “…[I]n one study when information was presented orally, people remembered only about 10 percent of what they heard when tested 72 hours later.  That figure jumped to 65 percent when pictures were added.”

2.    Our decisions and actions are based more on emotional reactions than rational thought.   “Today’s neuroscientists, using the latest brain scanning technology, have confirmed this: tap a person’s emotions and you have a much greater probability of influencing his or her decision-making.  Good visuals make people feel first and think second.”

3.    Visuals are the most effective communications vehicles for evoking emotion and getting people to take action.  Advertisers know this.  “It is why [they] spend far more time wrestling over the choice of pictures than they do over the words they chose.”

“Seeing is Believing” can have a profound impact on your ministry. (Make sure you catch the report’s “Seven Rules for the Road”)  Whether it’s getting someone to take more pictures of what you are doing inside and outside the church or using photographs to make your sermons more memorable – don’t ignore what neuro-scientists are saying about visuals and storytelling.  And for heaven’s sake – take a road trip with some teenagers and see what you can learn from them too.