What I heard at Table Talks 2.0 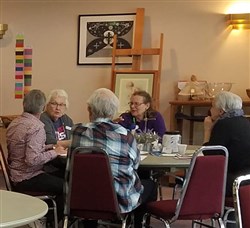 Coming Out Pilgrimage "Seventeen years ago I awoke early one morning and began my coming out pilgrimage. Though I had long imagined what it would be like coming out, the very act of coming out of my closet brought both unbridled joy and literally scared me to death. It was these polar opposite feelings that effectively stopped me from leaving the closet’s narrow, loathsome confines. I was paralyzed emotionally, wanting to embrace the emotional, relational, intellectual, spiritual, and physical...

Greater NW Pride: Publicity! How to Affirm LGBTQ+ People in Our Churches

Publicity! How to Affirm LGBTQ+ in Our Churches   In a recent article published on-line in The Advocate, Sam Brinton, who works with the Trevor Project, wrote an interesting article about the difference of being a “welcoming” community of faith, which simply “welcomes” those of us who are LGBTQ+ , and nothing more. Meanwhile, an affirming church affirms that God created us all—male, female, and non-binary, LGBTQ+ —in God’s image. In other words, God is not only male, female, and non-binary, but...

Transgender Visibility Day and Other LGBTQ+ Days   Happy Transgender Visibility Day! After seeing all the rainbow bunting, flags, t-shirts, and stoles on so many United Methodist Church websites, Facebook posting, and Instagram accounts after the vote taken by the UMC General Conference in February 2019, I thought it would be helpful to share with those UMC churches who are supportive of LGBTQ clergy, lay leaders, and lay members other ways of supporting those of us in the LGBTQ+ community. I...

Greater NW Pride: What Does it Mean to be an “Ally” in the LGBTQ+ Movement?

What Does it Mean to be an “Ally” in the LGBTQ+ Movement?   From time to time, in and among my LGBTQ+ friends, we joke about getting our “membership card” when we come out of our respective closets, receiving a list of what is the “gay agenda,” in which we strive for ultimate world power, somewhere between waking up, coffee brewed, showering, going to work, work, lunch break, take over the world, work some more, coffee break, and going home to make a “fabulous” meal before we turn in and go to...

Greater NW Pride: What Does LGBTQ+ Mean? A Primer

What Does LGBTQ+ Mean? A Primer   Language matters. And naming and labeling matters. One’s “sexual orientation” is a social construct and context dependent, which we all use to identify and self-identify just one part of our life. So, I am a gay, cisgender, white, male, Christian, who prefers the personal pronoun “he/him/his;” I am able bodied and hearing. Our gender, race, ethnicity, nationality, age, ability, hearing, being deaf, disability, socioeconomic class, and religion also matter and ...

Beyond the Rainbow Flag (Or “Once the Rainbow Flags Are Down, Then What?”)   Since the vote taken by the delegates at the United Methodist Church’s (UMC) specially called General Conference, my Facebook page with other UMC contacts exploded with images of rainbow flags, banners, bunting, pics of whirligigs, candles, hats, pins, ribbons, hair bows, and tassels. Everywhere I looked on various UMC websites, there were more rainbow memorabilia, with banners draping church signs, rainbows flags ...

What St. Harvey Milk Has to Say to Queer UMC Folk   Above my desk in my office space in the OR-ID United Methodist Church Conference Center is a modern-day icon of St. Harvey Milk, one of my heroes in the LGBTQ movement, painted by the local artist Chris Haberman. In this moment of change within the United Methodist Church, I’ve asked myself, “What would Harvey do?” After all, he was in the nexus of change in modern American society, and his story, like many other stories of LGBTQ people in ...

Your Oregon-Idaho delegates were deeply disappointed in the outcome, a step toward punitive legalism and away from inclusion of all God’s people. As your lay delegate, I’d like to share some observations