Last Saturday, we along with our neighbors assembled 100 cleaning buckets for disaster relief for the United Methodist Committee on Relief (UMCOR). It was a slick operation set up like an assembly line. People would take a five gallon bucket, go down the row, and put in all the required supplies. David Cook was at the end of the line to seal the lid of the bucket to be stacked and made ready for transport.

Kids had a great time filling a bucket, then running back to the starting line to go again as if it was a favorite ride at an amusement park. We had kids of all ages from 4 to 94 joining in the fun. Things were going so smoothly that we filled over 70 buckets in an hour.

None of this would have been possible without the people working behind the line to make sure that the supplies were ready for the fillers. We had to remove all the packaging from the supplies because, as David said, we don’t want to send garbage to a disaster area. We also had others preparing a wonderful lunch for all of our guests and workers. It was truly an amazing thing to see.

We were already planning to invite the community in to see the PLACE for our Grand Opening when David Cook had the inspired idea to put together 100 Cleaning Buckets for the UMCOR Depot in Salt Lake City. 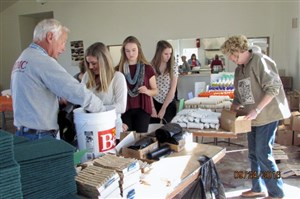 With all the flooding in Louisiana, the hurricane that hit Florida, tornadoes in the mid-west, and now flooding in Iowa, UMCOR’s stock of cleaning buckets was very low. They were down to their last 150 at the Salt Lake City depot. Our buckets will not have to wait very long before they are in the hands of people who need them.

We had a big goal. Really it was a goal that was unreasonable, too big. It was a God-sized dream. As we’ve been talking about in September, we need to have dreams that are destined to fail without God’s intervention.  It is no surprise that God showed up in a big way and made this an amazing experience.

A huge THANK YOU to everyone who helped put together the cleaning buckets and to those who sponsored buckets. And Thank You to Joseph Hardware that helped us get all the supplies at a discounted price. None of this would have been possible without you! Glory to God!