On Sunday, March 23, 2014, the Amity Campus of the Cathedral of the Rockies, Boise First United Methodist Church, took the next step in faith. Two hundred and fifty people gathered for the ceremonial ground breaking service. Pastors Kathy Abend and Steve Tollefson began the digging together, followed by adults and children of all ages. After each shovel of dirt was thrown into the air, the congregation proclaimed:

“With faith in Jesus Christ, this work is begun and this ground is broken in the name of the Father, and of the Son, and of the Holy Spirit, also known as our Creator, Redeemer and Sustainer.”

Thus begins the construction of a sanctuary that will seat 300 people. It is expected to be completed in time for Christmas Eve services 2014. The total cost of the project is $1,500,000. The Amity Campus is in the process of seeking to raise the last $500,000 needed to pay for the sanctuary. 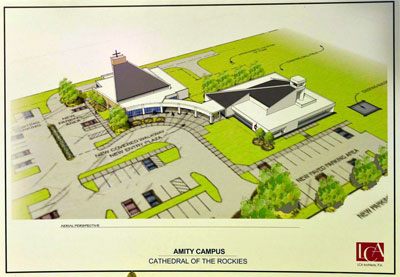 Located in southwest Boise, Amity UMC has experienced some ups and downs since it was chartered by 75 people in 1979. At one time, the church only had 12 people attending worship on a Sunday morning.

In June 2013, Amity United Methodist Church merged with Boise First United Methodist, also know as, "The Cathedral of the Rockies".With the deep faith of the existing congregants in the vision God has for this church, along with resources from Boise First United Methodist, the attendance and giving at the Amity campus has doubled in less than a year. This new vitality and excitement in God’s call to serve, inspires the church to move forward as a growing community of faith with a vision for ministry to all people.