Eva Johnson, Chair of the Oregon-Idaho Council on Native American Ministries (CONAM), invited a room full of the Conference laity to join her in a morning prayer

song.  After completing this spiritual opening, she asked everyone to use their imagination as she opened her workshop at Annual Conference.

Based on an exercise found in the book, “On This Spirit Walk,” Eva asked everyone in the room to think about their culture: what customs they grew up with as a child; what their family and household looked like; did they have a particular language or dialect that was used or even a special way of dressing.  “Now imagine as a young child, you are rounded up and taken away from everything that is familiar to you.  Your clothes that you came with are taken and new uncomfortable ones (as well as things for your feet) take their place.  You are told that you are not to speak your native language but to learn a 'new, better one.' You will see your family again but only if you do as you are told and follow all the 'strange' rules.”  Eva paused as she led the group through each of these thoughts and experiences.  And then she said, "This is what happened to the Indian, Native American children when they were taken from their families and homes to boarding schools, often far from the land (or climate) they were accustomed to. Such schools were intent upon assimilation in which everything native was to be eradicated and replaced with Christianity, civilization, and education.” (page 5, On This Spirit Walk).
The participants then had the opportunity to talk around tables about the experiences and thoughts that this exercise brought up for them.  Members of the CONAM committee were seated at various tables throughout the room to help facilitate conversation.  After a brief period of discussion, she opened up the mic for people to share with the whole room.  Some had questions that the group attempted to answer.

The workshop closed with giving copies of the book “On This Spirit Walk” to individuals and encouraging the laity to have a follow up study using it.  Also the group was reminded that any Sunday can be “Native American Awareness” Sunday and to contact CONAM if any are interested in having a guest speaker. 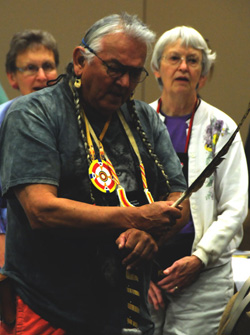