In early August, Betty Cobb-Colgan (Holy Land Task Force/Portland First UMC) and I were privileged to participate in a unique conference for United Methodists.  “Walking with Palestinian Christians For Holy Justice and Peace” was the result of a collaboration with the General Board of Global Ministries (GBGM) and the Ginghamsburg Church, a Methodist “mega-church” that I believe is the largest in our denomination (or at least in the US!).

The focus of the conference was to increase awareness of the Palestinian “plight,” educate participants on the positions and actions that the United Methodist Church has already taken on what could euphemistically be called the “situation” in Palestine/Israel, and present ways that the church can take the next step toward helping to bring peace to the Holy Land. 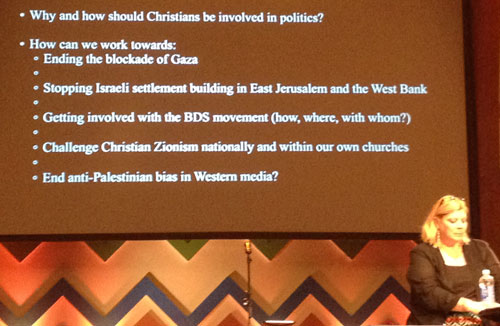 In light of the ongoing aggression against Gaza, it was apparent that conference attendees felt a palpable sense of urgency, along with the conviction that this is truly a “Kairos time” (Greek word meaning “God’s time”) in which we needed to stand in solidarity as Christians and begin to take actions that will really make a difference towards bringing peace and justice to all in this very troubled land.

Thomas Kemper, General Secretary of GBGM, invited participants to “join hands with fellow Christians [and discuss] how we can contribute to holy justice and peace between people of all faiths,” while Bishop Ivan Abrahams, General Secretary of the World Methodist Council, reminded conference participants that “Tears and outrage alone cannot stop the violence.”  Bishop Abrahams, a native of South Africa, drew parallels between the Apartheid era in that country and the Israeli occupation of Palestine, which many believe is even worse.

A number of Palestinian Christians were present to speak for themselves to the suffering that they endured just to live their every-day lives.  “Living in Palestine is living under the shadow of the cross – all the time,” said Grace al-Zoughbi, a professor at Bethlehem Bible College.  Wisam Salsaa, a tour guide in the Holy Land urged his audience to “be the voice for those who cannot speak; be the ears for those who cannot hear.  We are human; we deserve to live just like everyone else on this globe,” he added.

Rev. Alex Awad, Dean of Students at Bethlehem Bible College and GBGM missionary, presented a “Biblical Call to Action,” suggesting that religion and politics are inexorably tied and citing numerous examples of “political scripture,”  beginning with Moses’ “Let my people go,” which remains applicable to the present day occupation.

And what are United Methodists doing?  What should we be doing?  Presenters from the General Boards of Pensions, Church and Society and Global Missions all spoke to how their respective agencies are responding to General Conference resolutions that date back to 1964. Most recently, those resolutions have centered on Boycott Divestment and Sanctions (BDS), a movement that started in Palestine in 2005.  This issue of divestment received increased focus in the United Methodist Church when a resolution asking the Church to divest from companies complicit in the Occupation was brought to the floor of General Conference in 2012.  The resolution was defeated; however a resolution to boycott products made in settlements passed, and has been incorporated into the Book of Discipline.

As those following this issue are aware, the Presbyterian Church passed a divestment a resolution at its Conference earlier this summer, and eyes are now on the United Methodist Church, the largest Protestant denomination in the US, wondering if we will follow suit when The United Methodist General Conference meets in Portland in 2016.

With one voice, the Palestinian Christians speaking to the conference, urged us to take this action.  “The Occupation is profitable for Israel,” Awad said.

Another action that conference participants were asked to take was to “come and witness.”  The Methodist Church has had a missionary presence in the Holy Land for a long time.  Although there are no Methodist churches in that part of the world (a conscious decision made so as not to further dilute the already tiny Christian population), missionaries work with the local Christian communities, as well as with Muslims and Jews who are working for peace in the region.   “Come and witness; see and help,” said Awad.

Members of the Oregon-Idaho Annual Conference will have an opportunity to do just that with a Study Trip to the Holy Land, February 23-March 4, 2015 that is being hosted by the Holy Land Task Force.  While the current “situation” in Gaza may give some people pause about traveling to the region at this time, Kristen Brown, Methodist Liaison to Palestine/Israel, reports that most groups who have scheduled trips through her are still planning to travel, and points out that the distance between Gaza and the West Bank is considerable.   Further information on this trip can be found on at http://gocamping.org/camps-retreats/detail/palestine-israel-trip.

Finally, conference participants were asked to pray for the situation in the Middle East and for all who live and work in this troubled region.