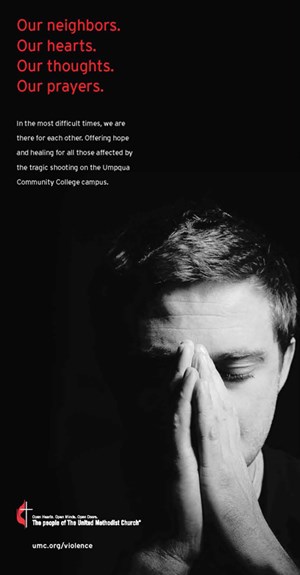 As the city of Roseburg and the surrounding community try to grasp the realities of Thursday’s violent shooting at Umpqua Community College, churches of all faiths are offering support.

The Rev. Scott Harkness of the Roseburg United Methodist Church says that so far he has not learned of anyone in the church’s congregation being a victim. But in a small town like Roseburg, many people will be friends or acquaintances of victims and families of victims. “I’ve had offers of help from around the region and even across the country,” he shared, “There’s a whole nation of people standing in solidarity and prayer with us.” He plans to make that connection and support part of his message to the congregation on Sunday.

The Rev. Gwen Drake, superintendent of the Crater Lake District, called on churches to provide a time in worship on Sunday to acknowledge the community’s pain. That could be lighting a candle or other activity to connect to the people of Roseburg. “My heart is broken today.” She shares, “As we break bread together on Sunday, we remember all the broken hearts.”

The call for connection across the globe is especially significant because Sunday, Oct. 4, is World Communion Sunday – a day for Christians of all faiths to join together and remember the breaking of the bread and drinking of the wine that represent the love and sacrifice of Christ.

United Methodist Communications and the Oregon-Idaho Conference have worked together to place message of hope, healing, and prayer in newspapers in Roseburg, Eugene, and Portland. These represent a first step in responding and reminding the community that a world of people are offering support and prayer.

The full-page advertisements are similar to those placed when other communities dealt with crisis, such as earlier school shootings, a bridge collapse in Minnesota, and the 9/11 terrorists attacks. In addition to offering prayer, the ads provide a link to stories and resources for dealing with violence on the umc.org website.