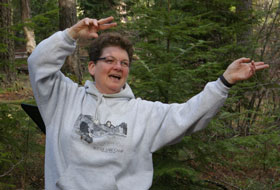 Hoefner began work in the Oregon-Idaho Conference in 1998, as the Director of Suttle Lake Camp.  A year later she became the Executive Director for Camp and Retreat Ministries.  Prior to this she served as Conference Director of Camp and Retreat Ministries in the Wyoming Conference (now divided between the Upper New York and Susquehanna Conferences and despite the name, not near the state of Wyoming). Also, as a site Director in the Central Pennsylvania Conference (Wesley Forest) and camp staff member in New York Conference camps (Sessions Woods, Epworth, Quinipet).  Hoefner  was ordained in 1977, and has served churches and directed cooperative parish ministries in New Britain and New Haven, CT, Newark Valley and Chenango Bridge, NY.  Twice she began new congregations as part of the camp’s ministries in the communities in which they are located – in Weikert, PA and Sisters, OR.
Just as she began her time as Executive Director in the Oregon-Idaho Conference, the Camp and Retreat Ministries Board underwent major changes in organization. It was among the first in the conference to adopt a policy governance board, now often referred to as single board governance. It was also the time when four camps were recommended for closing because consistent leadership and quality experiences were difficult to maintain at all locations.

During her tenure, financial sustainability has been addressed through the creation of a Council of Advocates which began the first annual giving appeals in 2000, the publication of the gocamping newsletter, the development of a donor database and acknowledgement system, and attention to grant-writing to support ministries that connect with foundations in and beyond the church. Ground work was laid for a capital campaign that eventually launched in 2008 as the Time to Grow campaign – raising about $3 million for improvements at the various sites.
Two of the camps slated for closure were able to be reborn under Hoefner’s guidance. Leadership recruitment allowed more stability at Camp Latgawa, and a complete turnaround of facilities and staffing at Wallowa Lake Camp. The entire Wallowa camp is now rebuilt focused on adult and family ministry needs, while strengthening horse camp experiences for children and youth.

As Hoefner began her ministry in the conference, a website for camping was just beginning to be created. Now the camp and retreat ministries are extensively utilizing the gocamping.org website in its third major overhaul and online registration has become the norm.

Under Hoefner’s leadership, Camp and Retreat Ministries is always focused on supporting the goals of the Annual Conference.  She has demonstrated that through several major new ministries as well as expansion of existing ministries of spiritual formation and leadership development for all ages. Two examples are Creation Vacation and day camping programs.

Creation Vacation camps are a response to the goals of new places for new people, especially connecting with people in poverty in our communities. What started with one event at Camp Magruder, now is known for 6-8 events each year at Suttle Lake, Sawtooth, and Magruder.
Day camps that brought four camp staff members to local church communities were begun in the 1990’s, in response primarily to the conference goal of increasing and supporting Hispanic ministries in local churches.  In the  years of community day camps, 47 different congregations were assisted in reaching their neighborhood children.

In the Oregon-Idaho Conference, camp and retreat ministries have never been just about serving children in the summertime. Churches expect all ages to be reached through outdoor ministries year round! During Hoefner's tenure, trip and travel experiences for adults, including pilgrimages to Iona, fly-fishing in Yellowstone and Alaska, canoeing through the Canyonlands, and other new ventures were developed.

Hoefner has worked closely with the Council on Native American Ministries (CONAM) to make possible support for Native American ministries through Hallowed Ground camp at Wallowa Lake and Huckleberry Camp at Magruder. Strength for the Journey camps have adapted and grown to meet the changing needs of persons living with HIV/AIDS and have continued to lead the conference’s AIDS ministry.  Mission education happens at camps through work with the elimination of hunger emphasis and most recently the “Imagine No Malaria” campaign.

The number of events that assist local congregations in deepening fellowship and building community among adults with common interests also expanded through 10-12 needlework/quilt/knitting focused events at five different sites. Support for music and worship ministries increased with new bell and choir camp experiences at Wallowa Lake as well as Magruder, and a wide-reaching series of events at Alton L. Collins Retreat Center.  Family camps, especially multi-generational events like GrandCamps have also seen rapid growth in the past several years. Local church vitality is a key focus of the many ways the camps are used by congregations each year – women’s and men’s retreats, confirmation retreats, youth retreats, all church “friends and family” weekends, planning retreats, lectionary groups, Bible study, and choir retreats - camps served as many UM’s in events initiated by local congregations as by events offered conference-wide.

Several  ecumenical partnerships have been entered into with Hoefner’s efforts.  The Presbytery of the Cascades was a long-time partner, and now the Episcopal Diocese of Oregon is working side by side with United Methodists.  Relationships have also been built with Disciples of Christ (Christian) church. In Oregon camps and conference facilities host a multitude of other denominations, independent churches, and interfaith groups. Hoefner has built these relationships, often serving as a consultant, and believing that our witness is better together than apart.

In retirement she will continue to go camping, canoeing and backpacking, volunteer with outdoor groups, do trail work and outdoor education, and travel more of the United States with a little travel trailer. Her first month of retirement will include an extended visit with family, welcoming newborn children of the next generation.

The Board of Camp and Retreat Ministries will be conducting a nationwide search to recruit a new Executive Director to lead the dynamic camp and retreat ministries of Oregon and Idaho.