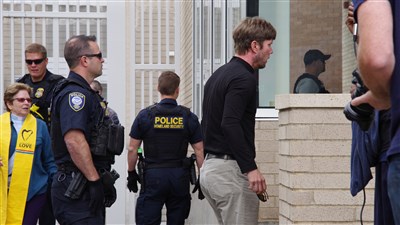 Among the 22 people arrested during a peaceful protest on Thursday outside of Immigration and Customs Enforcement offices in downtown Portland were 7 faith leaders from the Oregon-Idaho Conference.

In its last August of Action events, the Interfaith Movement for Immigrant Justice (IMIrJ) of Oregon held one last rally and sit-in at ICE offices to protest the continued detention of asylum-seekers at the Sheridan Federal Corrections Institution.

IMIrJ worked with clergy leaders from various faith organizations to continue pressing ICE Acting Regional Director Elizabeth Godfrey to release the 60-80 asylum-seekers still be detained, with 21 of the 22 people arrested being clergy who had identified ahead of time their willingness to participate in a sit-in and possibly be arrested.

“This is not how humans treat each other,” said retired Rev. John Pitney from McMinnville. “As a citizen of the United States, we’re so much better than this. I’ve been speaking out for a long time on a lot of things and the last few years, it’s like, that’s not enough. It’s time to show up.”

These clergy were arrested while sitting in prayer and blocking the main gate to the inside of the ICE facility.

Each of the 22 arrested were cited with allegedly failing to comply with a lawful order from a federal police officer and blocking an entrance to a federal facility.

“Our United Methodist ‘Book of Discipline’ states that our theological task is contextual and incarnational. It is grounded upon God's supreme mode of self-revelation-the-incarnation in Jesus Christ. God's eternal Word comes to us in flesh and blood in a given time and place, and in full identification with humanity. Therefore, theological reflection is energized by our incarnational involvement in the daily life of the Church and the world, as we participate in God's liberating and saving action,” wrote Greater Northwest Episcopal Area Bishop Elaine Stanovsky.

“The Bible teaches that God expects people of faith to welcome and care for widows, orphans and strangers/aliens/foreigners.  The United States government is taking harsh actions against immigrants, whether or not they have entered the country legally.  Sometimes, after reading the Bible, praying, and listening to the voices of people who are imprisoned and oppressed, people of faith are led to oppose harsh and inhumane treatment of immigrants.  I honor these United Methodists and other faith leaders for putting their voices and their bodies on the line for justice and fair treatment.  If they were to keep silent, the very stones would cry out (Luke 19:40).”

Thursday’s arrests culminated a month of protests where clergy and other faith leaders protested outside of ICE on a weekly basis demanding authorities “Let our People Go!” Previously arrested from the Oregon-Idaho Conference were Rev. Barbara Nixon of Corvallis and retired Rev. John Schweibert and his wife Pat Schweibert of Portland.

Once in front of the ICE building, volunteer security leaders blocked traffic trying to turn in front of the ICE offices while IMirJ leaders held a “Sanctuary in the Streets” church services. They sang, prayed and told stories of asylum seekers who had been detained without access to legal representation, proper dietary needs and more. One of the detainees recently released from the Sheridan federal prison thanked the group for their prayers. He was stopping by the ICE offices to pick up his belongings when he noticed the protest.

After worshipping in the street, the group moved in toward the ICE offices, with the 21 clergy who had previously indicated to IMIrJ they were willing to be detained forming a circle in front of the ICE gates.

The clergy prayed, sang and offered up their own reflections on why they were getting involved.

Farrell said she felt called to act after having a disturbing dream one night about an earthquake that separated her from her children – who were 5 and 8 years old again the dream – and the frantic feeling she woke up with.

“The panic, desperation, and anxiety I felt in that vivid dream continues to remind me of how much more profound and prolonged is the despair of people caught in the earthquake of separation from their family as immigration detainees,” Farrell said. “It is one of the reasons I feel compelled to risk arrest to express solidarity with detainees and call for an end to the family separation practices of ICE. Another reason is my conviction that God’s love, grace and intention for good is so great for every single one of us that we are in this together.”

After announcing over a loudspeaker a few times that blocking an entrance to a federal facility could result in arrest, officers with the U.S. Department of Homeland Security began approaching protesters and arresting them. Caldwell was arrested in a different location from the protesters while taking photos.

The group was taken to a garage within the ICE facility where their personal belongings were taken for inspection and placed in handcuffs. One group was transported initially to the federal courthouse in downtown Portland for processing and release, while another group was housed in cells within the ICE building while awaiting transport.

“I found the whole experience, from start to finish, transformative,” Martin said. “It was an important learning experience for me.”
She said she was transformed by linking arms with other clergy colleagues of different faith, listening to stories of asylum seekers and those recently released, praying, singing and even having conversations with the federal officers making the arrests.

“We are both acting out of a sense of goodwill but toward different ends,” she said. “There is much we can learn from each other.”

As Martin and several clergy colleagues awaited release at the ICE facility, they witnessed two men in custody – not associated with the group – be told they were being taken to Tacoma, Wash., where they would eventually be deported.

They watched as the two men were handcuffed and shackled before being put on a bus. All they could do was wave to each other.

Story and photos by Kristen Caldwell.