“On this day we get a complete do-over. Everything begins again.”

On December 14, 2014 the Amity Campus celebrated the Grand Opening of its new Heaton Chapel. Nine months after the first shovel of dirt was tossed into the air, the Amity Campus was born anew. Pam McDonald, one of the long-time members of Amity United Methodist Church in Boise, Idaho, now Amity Campus of The Cathedral of the Rockies, said “On this day we get a complete do-over. Everything begins again.”

Take a video tour of the new chapel.
On hand to celebrate this historic event were several charter members of Amity UMC and their founding pastor, Rev. Steve Tollefson; Rev. Duane Anders, Senior Pastor of The Cathedral of the Rockies, and Rev. Kathy Abend, the Amity Campus Pastor. Grant Hagiya, Bishop of the Greater Northwest Episcopal Area, congratulated the congregation via video on this momentous accomplishment. Also in attendance were Dick and Barbara Heaton and their family who donated a one million dollar lead gift to the Cathedral of the Rockies for the construction of this new chapel. 425 members and friends of the Amity Campus and the Cathedral of the Rockies packed the house to make this a joyous event.


This story began in the spring of 2013 when Rev. Lisa Payton, the pastor of Amity UMC, met with Tollefson, Anders, and District Superintendent Kim Fields to discuss a possible merger of Amity UMC with the Cathedral of the Rockies. The small and struggling Amity UMC took a vote that decided their future to become “One Church-Two Campuses” with The Cathedral of the Rockies. Tollefson, who had recently retired from his 17-year appointment as the senior pastor the Cathedral, agreed to take on the newly merged campus as a half-time pastor. About seventy-five people from the Downtown Campus of the Cathedral agreed to attend the newly formed Amity Campus for one year in order to help revive and reinvent this church. 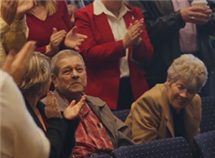 Dick & Barbara Heaton receive thanks
A few months into the merger, Dick Heaton, one of the members who agreed to worship at the Amity Campus, asked Tollefson when they were going to build the new sanctuary of the Amity Campus. Tollefson replied, “Four or five years or when we can build up the congregation enough to begin a capital campaign.” Heaton responded with, “I’ll give you one million dollars if you will complete it in 2014. I’m an old man and I want to worship in the new sanctuary.” A capital campaign started immediately and a ground breaking followed soon after, in March 2014. The Grand Opening in December of 2014 was the culmination of one crazy year of growth and change at the Amity Campus. With the Heatons gift, and over $500,000 raised in a capital campaign, there is now less than $50,000 of the project to fund. 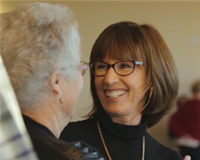 Kathy Abend (pictured right) was appointed to the Cathedral of the Rockies as the Amity Campus Pastor in July of 2014. She has this to say about her appointment, “When I first talked to Duane about this appointment, he casually told me he expects this campus to grow from the 80 people in weekly worship to 400-500 people in three years. I told him he had better keep looking for that pastor, because it’s not me. I’m not sure Jesus could do that.” As the itinerant system would have it, she did go to Amity and now she feels like the luckiest pastor in the conference. “I arrived to a church on fire. There was a high level of energy and excitement created by the merger, the new building, and the possibilities for its future. My job was to keep this energy going, complete the building project, and fill it with people by December. By the power of God, together with the hard working people of Amity, we accomplished this mission.”  Now the work has begun to build a congregation and a system to sustain the growth they have experienced over the past year. Duane Anders has experience with multi-site churches from his of years of serving as a pastor and District Superintendent in Ohio. He took a small church and grew it into a thriving church with three campuses. He is coaching Abend and the staff at the Cathedral in the art of working and growing together. “The point of a multi-site church is that we can do more together than we can do apart. But any time you add a new kid to the family the family changes, and we are still in the process of learning how to work together as a cohesive family.”

According to the Leadership Network website, there are now over 5,000 multi-site churches in the United States and the number is growing. The Cathedral of the Rockies–Amity merger is the first of it’s kind in the Oregon-Idaho Conference. What was thought to be a fad in the early part of this century is becoming a growing trend. Abend talks about her experience as a new campus pastor. “I love working on a team with people who are creative, innovative, and very much in love with Jesus. As a pastor of a single church in a rural community I felt very alone, especially when challenges came along. Now I have a team of people I can turn to for ideas, resources, and support.”

Since the Grand Opening, the congregation has grown substantially now approaching 300 in the two services. New people are coming every Sunday to try out the new campus and many are staying because they are readily welcomed into a community of faith that is excited about Jesus, open to new ideas, and genuinely concerned about reaching out into the community to be the hands and feet of Christ in the world.

The leadership team is busy creating a set of programs and mission opportunities to meet the growing needs of the community. On January 18, they are launching the Amity Campus Random Acts of Kindness Campaign, which set a goal of 5,000 random acts of kindness to be accomplished in 2015. Every Amity participant will receive cards that say “You are loved.” on one side and the name and contact information for the church on the other. A Facebook page has been established to allow the recipients and the givers to tell their stories of these RAKs.

One of the most unique ministries started at the Amity Campus is the Food Truck Feasts held every Wednesday night at the campus. Anywhere from four to eight food trucks show up each Wednesday night offering the finest cuisine Boise has to offer in their parking lot. They set up tables either inside or outside, depending on the weather and the Amity folks offer hospitality to the neighborhood. Abend says, “People are willing to come to our campus for dinner in the parking lot when they wouldn’t be willing to come to church. We can get to know our neighbors, answer their questions about our church, and some of them have become active members of our church.”

Some of their other ministries include an after school arts program for children called Impact, that offers choir, art, drama and dance. They are hoping to build on the relationships they have started through their other ministries throughout the neighborhood. The campus has adopted the local elementary school and is tutoring, being playground buddies, offering food baskets, and craft projects during recess.

The Amity Campus is known for its People’s Garden that last year alone produced over 25,000 pounds of produce that was given away to local food banks, church families in need, and the neighborhood. This garden includes a couple of acres of vegetables, all kinds of berries and an orchard. Twice a week a group of 23-30 volunteers plant, weed, and harvest the produce. This has been another entry point for friends, families and neighbors to become a part of the faith community.

The Cathedral of the Rockies considers this merger a complete success. Anders is always looking for new opportunities to expand the work of the Cathedral throughout the Treasure Valley. He says the most important component to success is shared DNA. He says, “We need to have a similar mission and vision in order to successfully work together.” This model has been replicated in churches all over the country and may prove to be a new trend in the United Methodist Church of the Northwest.

As the people of Amity like to say, this is our complete do-over. Everything begins again. St. Francis believed the church of his day needed a complete do-over. He was quoted as saying, “We must begin again, create a new family who will not forget humility, who will go and serve lepers and, as in the old times, put themselves always, not merely in words, but in reality, below all people.” The Amity Campus is organically growing up from the ground and bearing fruit. Jesus is changing lives through the church, which is and always will be the best tool God has to reach the people with the Good News of Jesus Christ.