Below is the report shared on the umc.org website: 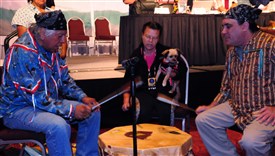 Keeping Sabbath: Resting, Rejoicing, Returning was the theme of the 48th Oregon-Idaho Annual Conference Session – the 48th gathering since merger of the Oregon and Idaho Conferences in 1969. The conference met in Salem, Oregon, where the first Oregon district meeting of the Oregon and California Mission Conference was held 167 years ago in 1849.

Conference was opened with a Native American welcome and drum circle. Bishop Grant J. Hagiya of the Greater Northwest Episcopal Area presided. In his opening message he offered thanks for the many people that supported the 2016 General Conference in Portland, Oregon with their time, energy and prayer. 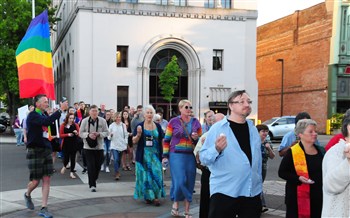 As the second day of the conference ended, members took time to stop and remember those who died in the Orlando night club shooting just days before. The public was invited to join in a vigil and “Walk of Remembrance” for those who had died. Bishop Hagiya spoke to the crowd before the walk saying, “Our church needs to be the bearer of peace and compassion for all people.”

In the laity session, Jan Nelson was elected as conference lay leader. Nelson is a retired educator who was also elected as delegate to General Conference and has been an advocate for peace, justice and inclusion within the church.

In conference actions, the body reaffirmed its standing resolutions that support the confrontation of heterosexism in society, protection of rights for children of same-gender relationships, comprehensive immigration reform, national health care reform, and ending gun violence.

The conference heard a report from a committee working to follow up on action in 2015 that called for divestment from market funds that include Caterpillar, Hewlett-Packard, and Motorola Solutions; three companies that have been identified as benefiting from the Israeli occupation of Palestine.  The committee – made of representatives from the Holy Land Task Force, Committee on Finance and Administration, Foundation, and Board of Pensions – devised a plan for responsibly divesting. By making use of a hybrid investment plan that uses Wespath (General Board of Pensions) and private investment consultants they will work to eliminate these investments. This scenario was made possible because Wespath representatives told the divestment team that they intend to remove Motorola Solutions from its Equity Social Values Plus fund in the next quarter of 2016. The fund already excludes Caterpillar and Hewlett-Packard.

The conference board of ordained ministry, meeting before the annual conference, adopted a statement that while holding candidates for ministry to high standards for fitness, readiness, and effectiveness in ministry, they do not take sexual orientation or gender identity into their consideration of candidates. In response, the clergy session crafted a similar statement committing to participate fully in the ministerial covenant with colleagues of all sexual orientations and gender identities. The clergy session voted to share publicly that statement from their private meeting. Both statements acknowledged that the groups, like the church, are not of one mind on the issue.

In direct response to the decisions of the General Conference, two actions were taken by the annual conference. First the conference passed a standing resolution supporting the work of the Religious Coalition for Reproductive Choice and they voted to join the coalition. The conference also passed a resolution to support “A Way Forward,” the plan by the Council of Bishops for a commission to review and bring forth a proposal for the church to resolve its differences over human sexuality and LGBTQ inclusion.

The conference commissioned two new elders (average age 35). There were 13 in the retiring class and 25 saints of the church were remembered at the memorial service.

Conference membership stands at 25,308 down 716 from the previous year. Worship attendance stands at 12,336 down 561. Professions and reaffirmations of faith stand at 472, up 42 from 2014. Adult and young adults in small groups increased by 297 to 7,749, while worshipers engaged in mission increased by 2,114 to 7,538. Mission engagement has more than doubled in the last two years.

Read reports from other annual conferences