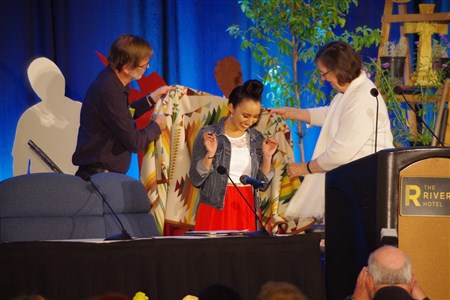 The spirit and vitality of the Oregon-Idaho Conference is alive and well, with several people earning special recognition for their ministerial efforts during Friday night’s awards ceremony.

For her fearlessness in addressing the issue of immigration and speaking out on her own personal story as a Deferred Action for Childhood Arrivals recipient, Yuni Rueda earned the Bishop’s Award from Bishop Elaine Stanovsky.

Rueda reminds us why we are United Methodists, Stanovsky said as she took the stage Friday night.

“You have been an incredibly powerful witness to us,” Stanovsky said. “You’ve put a face on those four letters – DACA. You’re a connector for us. May you never forget that God loves you and you are precious to God. God is working through you to bless the world.”

Rueda studies nursing at Western Oregon University. She was raised in Wilder, Idaho, and grew up in the Wilder Hispanic Ministry of the Oregon-Idaho Conference (now called Ministerio Metodista Amistad y Fe). She has been outspoken concerning the importance of DACA in this country and has appeared in interviews with the Idaho Statesman and Idaho Press-Tribune concerning this issue.

She’s also been involved in numerous leadership and training events within the life of the United Methodist Church and serves on both the Western Jurisdictional and Oregon-Idaho immigration workforce teams.

“I know for a fact that if it weren’t for God and the United Methodist Church I wouldn’t be here,” Rueda said. “Don’t stay quiet. I encourage you guys to speak up and not lose hope. It amazes me to see how God is working in us, especially in these times.”

Also recognized on Friday night for their role as evangelists were Ralph and Audrey Lawrence.

The married couple were presented the Harry Denman Evangelism Awards; clergy for Ralph, lay for Audrey.

Ralph was recognized for his longtime clergy service which has gone on well beyond the time he retired in 1995. According to Sage District Superintendent Gwen Drake he’s been involved in the church for more than 60 years. He’s currently serving Caldwell United Methodist Church.

He reported on Friday night after receiving his award that he has attended 66 straight annual conferences.

Audrey was recognized for her years of service in UMW, as a liturgist, Sunday school teacher, hospital visitor and everything in between. She’s been a tremendous lay leader at Boise First United Methodist Church.

“She beats me to the hospital every time,” said Boise pastor Duane Anders.

In two of Oregon’s rural communities, the United Methodist Church is thriving thanks to the work of Pastor Bob Reasoner and parishioners of Wasco and Arlington UMCs, which is why the two congregations have earned the Discipleship Resource One Matters Award.

Columbia District Superintendent Erin Martin said these two churches have been growing despite being in rural communities. At Arlington UMC, parishioners have committed to serving the transient population and have become known as a community church.

In Wasco, the congregation has committed to serving the community’s children – whether their parents are connected or not – through breakfast ministries as well as Sunday school.

The 2018 $2,100 Crane Scholarship was awarded to Mia Park as she pursues a master’s degree of divinity at Garrett-Evangelical Theological Seminary.

Wilshire United Methodist Native American Fellowship and aCross Culture (formerly Woodlawn Faith Community) each received a $1,050 Zimmerman Grant to develop a Native American art camp for the former and sponsor an African American pastoral intern for the latter.

Rev. Linda Tucker of Medford United Methodist Church and Rev. Adam Briddell of Eugene First United Methodist were both presented the Charter for Racial Justice award for their work to confront injustice in their local communities.

“To live the Charter is to recognize that racial justice is a biblical, leadership, community and public policy issue,” Warren said.

A whole team of recent and former college students came forward to present Warren and Isabelle Light with the Francis Asbury Campus Ministry Award for their leadership of the Wesley Foundation at the University of Oregon in Eugene.

“I found my call to ministry in this Annual Conference because of the work of the Wesley Foundation,” said Jessie Cummins, who was commissioned Thursday as a provisional elder.

“They embody what it means to walk and talk their Christian faith,” said Soteria Moli.

Students told stories of a safe and accepting place to be who they were on campus.

“It’s been an honor and a privilege to be allowed into their lives,” Isabelle Light said. “They are amazing individuals and we are so proud of them.”