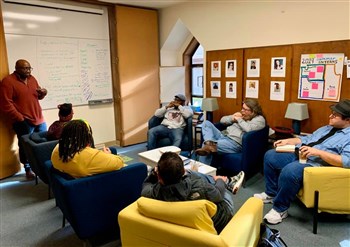 Sometimes being a misfit in the church makes all the difference.

For Rev. Dr. Leroy Barber, director of innovation for an engaged church in the Greater Northwest Episcopal Area, being an innovator, entrepreneur and leader of color in an institution that needs disrupting, has earned him national recognition.

He has been named one of five Tom Locke Innovative Leaders for 2021 by Wesleyan Investive (formerly the United Methodist Development Fund). The award recognizes five individuals who are pioneers in spiritual entrepreneurship and courageous Christian ministry.

Barber was recognized by Wesleyan Investive for his work as co-founder of The Voices Project, a non-profit which gathers leaders of color across fields who are pursuing change in their communities while uplifting more leaders of color. He’s also being recognized for the book he published in 2016: “Embrace: God’s Radical Shalom for a Divided World.”

The Tom Locke awards are being given to people who, among other things, have proven themselves as innovators and positively impacted the Methodist ecosystem and are investing time and energy into people, populations and communities not currently reached or well-resourced by the church.

“We are thrilled to honor these remarkable individuals who show us a new imagination for what the church can do for the sake of the world,” said Roland Fernandes, Wesleyan Investive Board Chair.

Barber established a summer internship program for young people of color to explore ministry settings and has established a pipeline program for people of color to find leadership opportunities within the church, among many other things, working to support the planters and innovators of color serving as local church pastors. All of this work has meant thinking outside of the box and disrupting systems already in place to make real change.

He’s quick to say that he’s not an institutional person.

(This award) acknowledges and affirms that the institution needs change,” Barber said. “It values the outside voice.”

Fernandes quotes a study from the Pew Research Center that reports the church (universal) is continuing to lose members (currently 43 percent of adults in the U.S. identify with Protestantism, down from 51 percent in 2009). It’s why Wesleyan Investive not only wanted to recognize those thinking outside the box with their ministries, but ensure that their work continues to grow through a facilitated cohort with fellow honorees to learn from one another, along with a cash award. 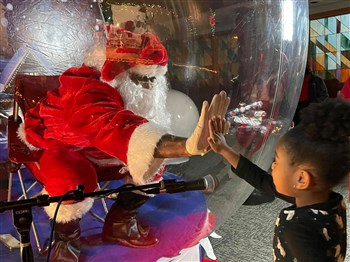 Barber’s work extends into ministries such as Black Santa PDX – providing an opportunity for children of color to see themselves represented in Santa every year for the last four years. In 2017, he traveled the country with other leaders of color to hold “kneel-downs” outside of NFL stadiums in protest and boycott when the NFL tried requiring its players to stand during the national anthem.

“Embrace” is one of just four books he’s had published and he’s currently working on his fifth, which he finds time to write when not serving as an adjunct professor in the global justice program at Multnomah University. He and his wife Donna, who serves on the David Douglas School Board, have six children and a few grandchildren.

“Leroy is one of the most innovative leaders I’ve ever met and worked with. He is a true disruptor, in every good, strategic sense of that word,” said Gibson, director of innovation for a new church and GNW IV team leader. “In all of my circle of collaborators, influencers, and true friends, no one is more deserving of this award than Leroy.”

Gonzalez, who serves as director of innovation for an inclusive church for the GNW, said she appreciates the fresh eyes and prophetic voice Barber brings to the work of the church.

“As a Black pastor trained in the Baptist tradition, he offers a prophetic voice that is rooted in social justice and equity. As an innovator, he sees opportunities where others see obstacles,” she said. “He is highly relational and lives out a commitment to nurturing into leadership BIPOC and queer young people whose voices are too often silenced in the mainline Christian church. I am deeply grateful to serve on a team with him.”

Barber describes the IV team, as well as the leaders of color nurtured in ministry setting across the Greater Northwest Area and community organizers he’s worked with through the Voices Project, as a group of entrepreneurial, visionary risk-takers. He’s glad to be part of a team of visionaries and hopes this recognition brings more attention to the creative work being done.

“At this point in my life, it’s about setting examples and opening up space,” Barber said. “This will open up space for other people of color.”

Learn more about Wesleyan Investive and Tom Locke on their website.