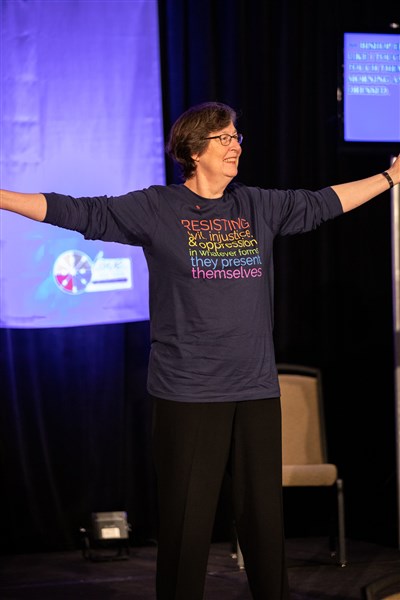 In this CrossOver year where the United Methodist Church has been discerning whether to stay together or split apart, Greater Northwest Area Bishop Elaine Stanovsky knows the church isn’t going to be the same.

“General Conference (2019) sought to chart this new way forward,” she said in her opening episcopal address. “But it may turn out to be a tipping point that tears us in two.”

Since that gathering in February, she said she’s heard from people at every point along the spectrum who feel victimized. She hears from people who don’t want the church to split but don’t know how to see a way to stay together as the General Conference voted to approve the LGBTQ+ exclusionary Traditional Plan.

She hears anguish from LGBTQ people and their allies about the harm that’s been done. And she also hears a fair amount of denial from people who can’t see their church changing.

She referenced the Wesleyan quadrilateral: scripture, tradition, reason and experience.

At 19 years old, Stanovsky was humbled to be in the presence of Albert Outler, professor of Wesleyan Studies at Perkins School of Theology, during the 1972 General Conference where social principles were adopted, including the church’s current stance that “homosexuality is not compatible with Christian teachings.”

Stanovsky said Outler argued for “Christian Teaching” to be in the statement rather than “scripture” because he explained that Christian teaching changes over time.

“We know more than we did in 1972 about human sexuality. But the church hasn’t learned and adapted,” Stanovsky said. “Oh, by the way, who decides tradition anyway? We make tradition by our practice of the faith.”

And it has become a tradition in the Western Jurisdiction to welcome all of God’s children for a long time. Rev. Jeannie Knepper has served as an out clergy woman in the Oregon-Idaho Conference for 26 years. In 1996 this Conference became a reconciling one. In 1999 68 United Methodist clergy performed a same-sex wedding in Sacramento.

There’s been leaders in the Greater Northwest Area like lay leaders Amory Peck and Jan Nelson, there have been clergy like Rev. Mark Williams and Rev. Karen Dammann who “came out” in 2001. There’s Mountain Sky Conference Bishop Karen Oliveto.

“They told the truth about their lives because the Bible told them to, and the truth sets them free,” she said.

Stanovsky said she knows not everyone agrees with her, and she’s OK with that. As Bishop, she says she won’t punish people who don’t see things the way she does.

She referenced the Table Talks, which started later Thursday afternoon, and will be discussion circles about which direction people think the church should head. But before that happened, Stanovsky said she needed to say something.

“I can’t be silent in a church that won’t see when the Holy Spirit is at work,” she said. “Now, we are going to have a serious conversation in the next two days. And it isn’t really fair of me to compromise it by speaking my heart. But there you have it.”

Download and read the full text of Bishop Stanovskys address, including portions that she did not have time to share at the annual conference.

Watch a video of the episcopal address.