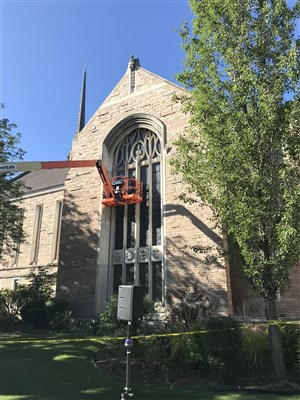 BOISE – Building on their commitment to fight racism, leaders of First United Methodist Church of Boise (Cathedral of the Rockies) deconsecrated a stained-glass window depicting Confederate General Robert E. Lee on Friday before workers will remove it permanently soon.

The service of deconsecration and removal of the window is the latest step taken by members of the United Methodist congregation as they move forward in repenting of racism.

The stained-glass window was installed in the church’s sanctuary as the church was being built in 1960. Stained glass windows throughout the sanctuary depict a number of historical and religious figures. This window included images of George Washington, Abraham Lincoln and General Lee.

Conversations over removal of General Lee’s image from the sanctuary began in 2015 following the massacre of nine Black Americans by a white supremacist in a Charleston, S.C. church. This year’s outbreak of police killings of Blacks in the United States rekindled the conversation and led the Church Council’s decision to remove the window.

“We believe continuing to have a window that includes Gen. Lee, who led the Confederate army in a war that was fought over slavery is inconsistent with our mission as a church and our values as Christians,” said Susie Pouliot, chair of the Church Council.

“We cannot have a banner above our door that says, ‘all means all – you are welcome here’ and continue to have a symbol of white supremacy in the form of Gen. Lee’s visage just a few feet away,” she said. “It’s wrong. It doesn’t represent who we are as a church and as individuals.”

Because of how the window was designed and built, the entire piece including all three men was removed. Members of the church are in the process of discerning what will take its place.

It is likely, Pouliot said, that the new window will portray a woman or women of color. “There are many remarkable Black women Christian leaders that have not received the recognition they richly deserve,” Pouliot said.

The window removed by the church is being given to Idaho Black History Museum in Boise.

FAQ on removal of the window