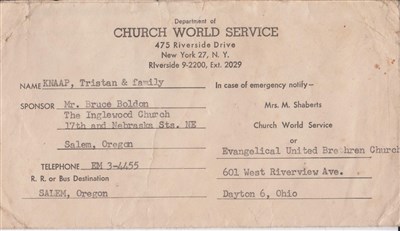 When Isolde Knaap was just 7 years old, she recalls the graciousness of Englewood United Methodist Church in Salem forever changing her family’s future.

Through the World Council of Churches, Englewood came to adopt her Dutch family, who emigrated from Holland after leaving Indonesia post World War II.

“They took it upon themselves to take care of these people they didn’t even know,” Knaap said.

It was this kind of amazing grace that kept Englewood UMC serving its surrounding community within Salem for more than 100 years.

It is the grace of this community which will lead the church forward. Even though Englewood UMC had a closing worship service in January after voting to disband their congregation due to declining membership, their legacy will carry on. The Englewood Church will become part of the Open Door Churches of Salem-Keizer ministry.

First called the Church of the United Brethren Christ, Englewood Church held its first worship service on Nov. 28, 1901 at 417 Marion St. The church had 28 charter members and services were held for several weeks in a large tent, according to church records.

On Oct. 8, 1902, one block of ground was secured and the Castle Chapel, named in honor of Bishop Nicholas Castle, was built.

By 1908, two lots in the Englewood district of Salem were purchased and Castle Chapel was moved to the present location at 17th and Nebraska Street NE.

With a promise of a $5,000 gift from the Women’s Missionary Association, loans from other agencies and gifts from the local community, the church voted in 1930 to erect a new building. The building cost $24,000 to build. 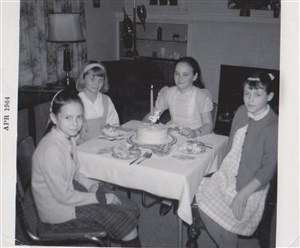 hool had more than 200 members.
Knaap remembers attending Sunday school, where her mom also taught classes. When one of her parents got sick and was in the hospital, church members came to take her to a movie or would help with her birthday party.


As a result of the rapid growth, an expansion was added in 1958 and in 1962 they celebrated with a mortgage burning party.

“Despite some initial apprehensions ... both the former Evangelical and the United Brethren denominations had had their beginnings in Wesleyan heritage and doctrine in common with Methodism,” church records state.

In December 1974, a Mexican-American congregation was given permission to hold worship each Sunday in the Fellowship Hall and for years the site hosted the Messiah Lutheran Congregation as well. In 1981, upon closure of the Leslie United Methodist Church in south Salem, 24 of its 43 members transferred to Englewood. 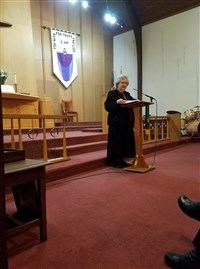 “The Englewood story is but partially told, however, when related only to buildings and improvements, financial worth, organizational structure and membership statistics,” church records state. “There is the more significant human and spiritual side of the story for which space allocated to this writing does not permit adequate treatment.”

Though the congration has disbanded, Knaap likes to believe the spirit of the church lives on in the members.

Because of the church’s graciousness in adopting them and helping them become U.S. citizens, her family has gone on to have successful careers and families.

“Englewood church bent over backward to help us out. They didn’t know us at all,” Knaap said. “We took the gifts that they gave us and ran with it.”