On August 20, 2019 there will be a day of commemoration. It will not be a celebration, but it will be a reminder for us all. On this day the United States will commemorate the 400th year since African slaves first arrived in the territory which became our nation.

Chattel slavery is that system in which people are treated as the chattel (personal property) of the owner and bought and sold as commodities. Because Africans first arrived on American shores as slaves, and the system ensured that they and their children remained slaves, a culture of white privilege and racism became deeply rooted in our nation before we even were a nation. I give a summary of that history later in this article.

I am taking this commemoration as an opportunity to kick off a major focus of my columns and work with the Cascadia District this year: an exploration of the issue of racism and white privilege. I believe this is one of the most pressing and critical theological, moral and ethical issues facing the church and our society today.

I am motivated by several current realities: 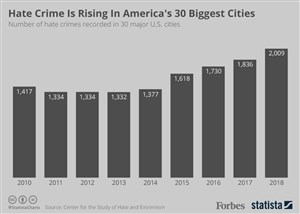 Over the coming year I will delve into scripture, church history, and present reality and will seek to both educate and awaken awareness in us all concerning these issues. I will challenge those of us who are white to be aware of our own racism and privilege and to use that privilege to combat racism and open opportunities for others. Racism is a serious problem and anyone who is white has benefited from being white.  If we are to begin to move beyond these issues it is up to us to do the hard but necessary work so that we can move away from simple tolerance to fully embrace diversity.

I am not naive enough to believe that what I will do can end racism. I know that these issues are deep and complex and that whatever I am doing will only be a beginning, a scratching of the surface. I also know that some will not want to make this journey with me, with us. For that I am sorry because it is so vital that we do this.  It is one way to work to transform lives and the world, one way we live the faith Jesus calls us to live, one way we embody our place as the beloved of God.

One resource I would recommend at this time is the Angela Project 40 Days of Prayer for the Liberation of American Descendants of Slavery available from Simmons College of Kentucky and on Amazon . The compiler, Cheri Mills, uses this quote from Dr. Martin Luther King, Jr.’s Letter from Birmingham Jail through her work:

We will have to repent in this generation not merely for the hateful words and actions of the bad people but for the appalling silence of the good people. Human progress never rolls in on wheels of inevitability; it comes through the tireless efforts of men willing to be co-workers with God, and without this hard work, time itself becomes an ally of the forces of social stagnation. We must use time creatively, in the knowledge that the time is always ripe to do right.

This is the time for good people, for you and me, to speak up and do our part to make the world a better place for all God’s people.

For those that don’t know the history here is a quick summary of how chattel slavery came to North America:

The Africans who came to Virginia in 1619 had been taken from Angola in West Central Africa. They were captured in a series of wars that was part of much broader Portuguese hostilities against the Kongo and Ndongo kingdoms, and other states. These captives were then forced to march 100-200 miles to the coast to the major slave-trade port of Luanda. They were put on board the San Juan Bautis, which carried 350 captives bound for Vera Cruz, on the coast of Mexico, in the summer of 1619.

Nearing her destination, the slave ship was attacked by two English privateers, the White Lion and the Treasurer in the Gulf of Mexico and robbed of 50-60 Africans. The two privateers then sailed to Virginia where the White Lion arrived at Point Comfort, or present-day Hampton, Virginia, toward the end of August. John Rolfe, a prominent planter and merchant (and formerly the husband of Pocahontas), reported that “20. and odd Negroes” were “bought for victuals,” (italics added). The majority of the Angolans were acquired by wealthy and well-connected English planters including Governor Sir George Yeardley and the cape, or head, merchant, Abraham Piersey. The Africans were sold into bondage despite Virginia having no clear-cut laws sanctioning slavery. (From: https://historicjamestowne.org/history/the-first-africans/)

Slavery in the US played a major role in our development as a nation. Across three and a half centuries—from 1501 to 1867—more than 12.5 million Africans were captured, sold, and transported to the Americas. According to New York Times blogger Maurie D. McInnis: The economic engine of the slave trade helped to fuel America’s prosperity. The profits from the trade in enslaved people flowed to many places. Traders were not the only ones to profit from America’s internal slave trade. Slave owners in the Upper South profited because they received cash for the people they sold. Slave owners in the Lower South profited because the people they purchased were forced to labor in the immensely productive cotton and sugar fields. The merchants who supplied clothing and food to the slave traders profited, as did steamboat, railroad and shipowners who carried enslaved people.

Capitalists in the North profited by investing in banks that handled the exchange of money for people, or in insurance companies that provided insurance for the owners’ investments in enslaved people. So did foreign investors in Southern securities, some of which were issued on mortgaged slaves. The hotbed of American abolitionism — New England — was also the home of America’s cotton textile industry, which grew rich on the backs of the enslaved people forced to pick cotton. The story of America’s domestic slave trade is not just a story about Richmond or New Orleans, but about America. (https://opinionator.blogs.nytimes.com/2015/04/03/how-the-slave-trade-built-america/)